Back In Love? Justin Bieber And Selena Gomez Caught Kissing On Cozy Date 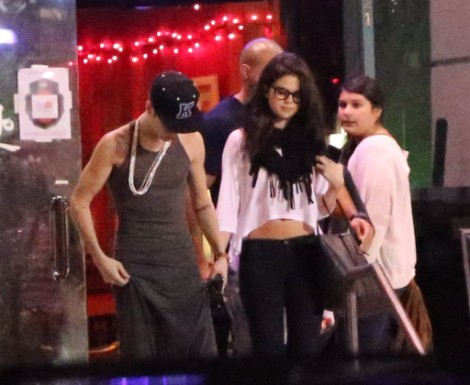 Godfather III didn’t give us much besides an amazingly beautiful Andy Garcia but it did gift us the line that just keeps on giving, “Just when I thought I was out, they pull me back in!” I like to think that runs on repeat whenever Selena Gomez’s manager prods her to keep kissing Justin Bieber when “sources” are around.

Because that’s exactly what happened a couple nights ago after the UNICEF Snowflake Ball. Selena went solo and there were tons of pics with her and newly divorced Katy Perry. Apparently they were close all night and people were all “Oh Katie must be giving her advice on getting through a high profile break up”. Well damn it Katy Perry! You didn’t work really hard because Selena was caught smooching with the young stud just hours later while on a date at the Dream Hotel’s Marble Lane in NYC.

A source told People magazine they stayed for 30 minutes and left hand in hand like the world was their high school hallway. “It was just the two of them, sitting together. At first they were quietly talking and then they started kissing. They were smiling, definitely seemed happy!”

“They weren’t fighting,” another source said.

So… not fighting means blissfully happy? There are a lot of shades in between. Trust. But maybe not for teenagers so I get it. When things are great they’re AMAZING and when things are bad the whole world sucks. We’ve all been there.

Are you happy with this Beliebers? Is this the proof you needed that Selena Gomez and Justin Bieber are officially back on? Do you love Justin Bieber in love? Is he more endearing that way? Personally, I like the Justin Bieber cheating stories with Selena Gomez look-alikes. It seems closer to character. And I don’t think for a second that Selena wants this. She just can’t cut him loose. She can’t stand the tears!