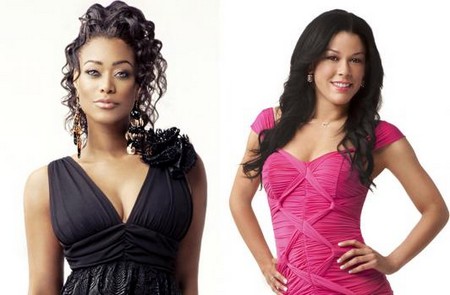 Basketball Wives’ Tami Roman bites the bullet and apologizes – sort of but not really – for her bullying on Kesha Nichols.  Well after my last article on Tami Roman from Basketball Wives apparently a lot of other viewers agreed with me. Tami Roman’s Twitter has blown up with an outcry of people calling her a bully.

After seeing Monday night’s episode where Tami verbally abused Kesha Nichols and took her pocketbook so she could apologize to her, it was all too much for the public to take. Evelyn Lozada her co-star on the show even started crying herself when she saw the poor girl shaking after taking a tongue lashing from Tami.

This is all so stupid and so unnecessary! Tami has finally come out with a public apology on her Facebook. She said “it is her responsibility to acknowledge that a mistake was made and she apologizes to her family, real friends and also her cast members who might have been on the receiving end of her wrath.“

That is a short version of what she said, but excuse me can I turn around two times did I miss something, she didn’t say ‘I apologize to you Kesha for the way I acted.’ All the rest of that garble sounds like someone wrote it from PR. Tami you say you’re a “down” chica, but if I was Kesha I wouldn’t think you were apologizing to me only try to save your own face. Tami call that mija and tell it to her or leave it on the answering machine it’s more sincere. Lord these B’s are not easy.