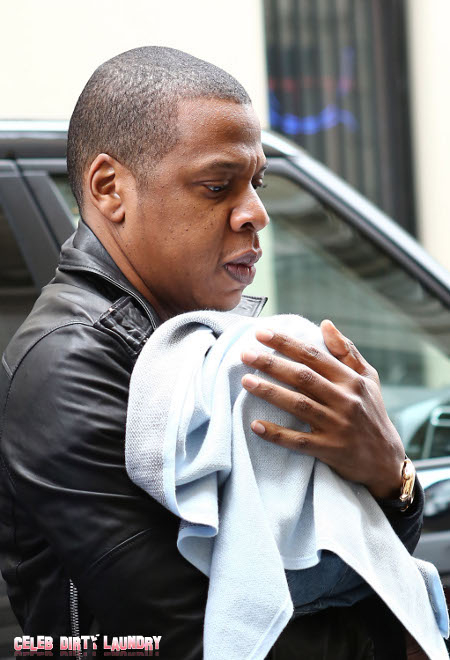 Beyonce flew off to Paris because she was missing her husband Jay-Z, who might’ve been feeling a little homesick, and baby daughter Blue Ivy Carter was right alongside them both. Aww . . . isn’t that sweet? The rendezvous of two lovebirds and their child. She and her husband Jay-Z were seen hanging out in the streets and taking leisurely strolls with their child.

I guess it must be nice to get away and go to a place where the media and photogs are a little less aggressive — looks like the two of them got a bit of peace, and maybe even a little quiet time.

What I don’t understand is why they always feel the need to have their baby, Blue Ivy Carter, wrapped up like a little mummy? You cannot see her hands or her face. Are they really that paranoid? So paranoid that they think someone is going to kidnap their child?

Sources are suggesting that the child you see wrapped up is, allegedly, a doll! They say this because for the size of the baby and the age of the baby in question, the size is questionable. I can understand their need to protect their child, but I hope they understand the fact that they are the ones fueling these rumors . . . because, apart from the initial hospital pictures, that child has not been seen LIVE.

I’m just saying, chicas, it’s strange . . . it’s not like they are the Trumps. Get real! Anyway, Lady B and Jay-Z were spotted hanging out in L’Arc with some friends. Who was not among them at the posh party? Our favorite Kim Kardashian and Kanye West. Hmm . . . isn’t that interesting.