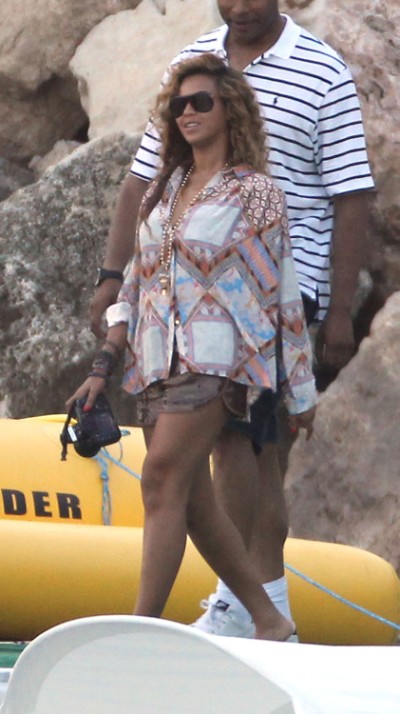 Look out little Blue Ivy. You might have to start sharing all that attention! Beyonce is pregnant with her second child!

Sources are allegedly confirming that Beyonce is expecting again with husband Jay-Z. HollywoodLife reports it spoke to a someone “close” to the power couple and the source confirmed eight-month-old Blue Ivy will be getting a new sibling in the coming months.

Still not convinced? Well MediaTakeOut has the pics! The website is showcasing photos of Beyonce dressed up in a skin tight leopard dress while out to dinner at La Marina restaurant yesterday in NYC. There is a noticeable pooch going on there but it doesn’t have to be a baby bump. That could easily be a food baby, right? I’m not so sure. We heard rumors earlier this spring that Beyonce and Jay-Z were in the family way and excited to be adding to their brood. Beyonce has no tours coming up so it seems smart to get the other baby out of the way before she refocuses on her career.

But still… I’m not feeling it. First off, she just got  back from a whirlwind vacation with Jay and Blue in Europe. I always come back from vacation a little rounder. And wasn’t Beyonce drinking a beer while she watched Jay perform (and hated on Kim Kardashian) at the Made In America festival earlier this month? So I’m calling bullsh-t. I could be wrong but I need more than a flabby belly after dinner!

HollywoodLife reached out to Beyonce’s reps and they naturally replied they had no comment. That is not an evasive answer. That’s publicists refusing to make something out of a story that’s clearly reaching. But I’ll leave it up to you. Take a look at the pics. What do you think? Is there a bun in the oven or did Beyonce just eat too many buns at dinner?