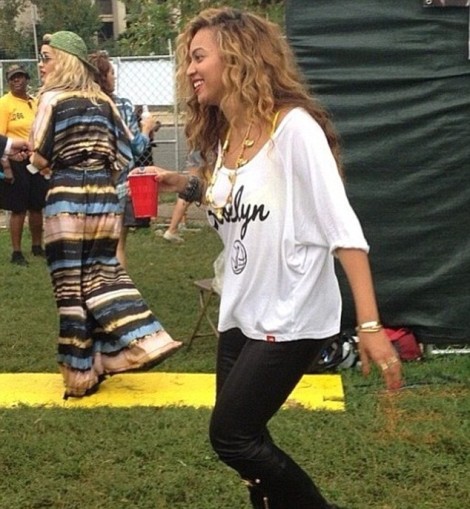 Kim Kardashian has tried to play it up that Beyonce is one step away from guest starring on Keeping Up With The Kardashians, but after the frosty reception Beyonce gave the reality star this weekend at the Made In America festival, I’d say Kim shouldn’t hold her breath. According to reports, Beyonce ignored Kim for most of the festival and the two barely spoke at all which has got to be awkward as all hell since their significant others are best friends and around each other most of the time.

But before you jump down Beyonce for meangirling poor little Kim, the sex tape star got her Calabasas girl on and ignored Beyonce right back. Entertainmentwise writes: “(Kardashian) didn’t make any efforts to go speak to Beyonce either.” She apparently clung to her token friend with the eyes that are too close together, a.k.a. Jonathan Cheban. Beyonce eased up a bit and the two women “made small talk in the dressing room, but you could tell Kim was uncomfortable. She clung onto Kanye the entire time and didn’t say much.(Kardashian) was talking to Jonathan, and Kanye was talking to Jay-Z and Beyonce.”

Naturally! You don’t think Beyonce would hang with Cheban do you? I’m not one to support social classes but some people should know their place! But why the cold front? I thought the ladies were all buddy buddy now?

Well, it turns out Kim got a little twitter happy and p-ssed off the reigning king and queen of music. This is where the story gets absolutely asinine, so since it’s concerning Kardashians, is probably totally true. Gather.com reports that Kim tweeted about her brother Rob Kardashian needing a good woman even though he’s supposedly dating Jay Z’s Roc Nation singer Rita Ora. Beyonce was partying with Rita throughout the weekend. Do you think Rita took offense and Beyonce took her side? Beyonce may be the biggest thing in music but she’s still a girl and a friend. It could happen.

Oh, but that’s not all. Kim also compared reality TV to rap music, “saying they were both misunderstood.” So Kim’s a pop culture/music expert now? Why does anyone take anything that woman says seriously? She’s a sex tape star! Well, apparently, Kim’s brilliant assessment didn’t sit so well with Jay-Z since his trade is based off of talent unlike Kim’s. The last thing anyone wants in life is to be compared to Kim Kardashian (see also: Prince Harry).

But are these reasons enough for Beyonce to throw Kim so much shade? I believe the Rita Ora story over the rap music comment. But seriously, the day women fight over Rob Kardashian is the day we all need to kick our own asses. I genuinely believe Beyonce is a good person though. I don’t think she’d start sh-t unless someone needed a little smack down. Obviously, Kim is a famewh-re of the greatest degree and her ego along with Kanye’s has got to be insufferable. Beyonce can share the spotlight. She’s got no problem sharing attention with her rich friends like my girl Gwyneth Paltrow. But she probably can’t stand it when women crave attention like Kim. Have you ever been around someone who keeps talking and you know they want you to ask them about themselves but you just can’t bring yourself to do it because you know they want it SO BAD! Is that just me? Well, that’s how I think Beyonce must feel around Kim. Kim wants it all so bad: to be accepted in the exclusive circles, to be married, to be known as a business woman. Hell, she even wants a star on the Walk of Fame. I’m sure Beyonce has to leave the room at times and just grab a beer because that sh-t is tiring.

So we can chalk up Beyonce’s cold shoulder towards Kim to so many new evidences but really the women are just too damned different! Check out how each of them dressed for the festival below. Beyonce looked so chill and Kim looked like she was going to a fashion show. I would have ignored Kim for that reason alone!

What do you think about the new Beyonce and Kim feud rumors? Do you believe the rap/Rita Ora comments are the real reason behind the snubbing or are the women just too different to be friends?