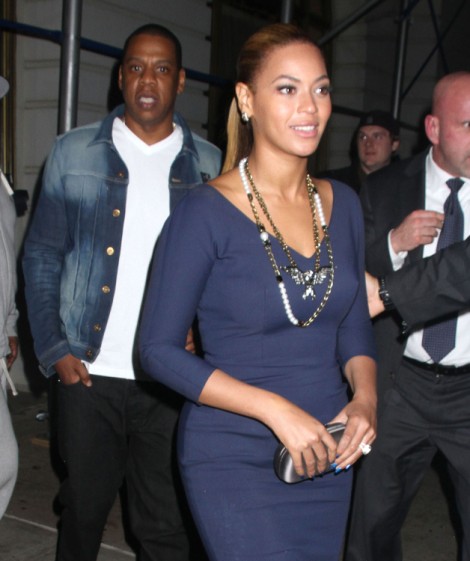 Perhaps Kim Kardashian isn’t looking so bad anymore? As everyone is reacting to the news that Chris Brown is possibly back with ex-girlfriend and ex-punching bag, Rihanna, Beyonce is telling her main man Jay-Z to cut the girl loose because she isn’t anything but trouble.

“She’s told Jay that Ri-Ri’s beyond hope and just isn’t their problem,” a source told Now magazine. “This drama has been going on for so long and people get hurt because she won’t grow up. Bey wants Jay to keeps his distance.”

Apparently, Beyonce isn’t too crazy about Rihanna’s wild nights lately. The Rude boy singer’s partying and vomiting are becoming stuff of legend and draw absolutely no parallels to Beyonce’s charmed nights at home with Blue Ivy while pontificating with Goopy bestie Gwyneth Paltrow. But Bey throw down an ultimatum on Jay? I’m not so sure – especially when it comes to Rihanna. B knows how much Jay loves Rihanna. He’d do anything for her if she needed him so I seriously doubt he’d pull the plug on that relationship when it looks like she needs him most.

Beyonce can’t be too stoked over the Chris Brown thing. I don’t understand people that are but if she’s pulling away from Rihanna in any way it’s got to be over that. You’ve got to let people do what they do and if Rihanna wants Chris back then she’s going to get him back regardless of what anyone else thinks. She tested the public opinion waters when she cried to Oprah and now she’s done testing.

But the weird this is it looks like Beyonce might not be as anti-Chris as I thought. In one of the pics snapped of Chris and Rihanna at the movies last week, it looks like Beyonce and Rita Ora are in the row in front of them. Why would Beyonce hang out with Chris Brown unless Jay-Z was comfortable with the relationship again? That must have taken a lot of persuading because Jay HATED Chris after the beat down. Sure, that was three years ago but do you just forget? Do you just let your guard down? If Now magazine is remotely true then Beyonce sure isn’t. So I think she’s playing along but side-eyeing this whole situation, you know?

So do you think Beyonce warns Jay-Z about anything, let alone Rihanna? Or do you think the the A-list couple is just keeping their distance from the new Rihanna/Chris Brown relationship until they feel like they have to step in?