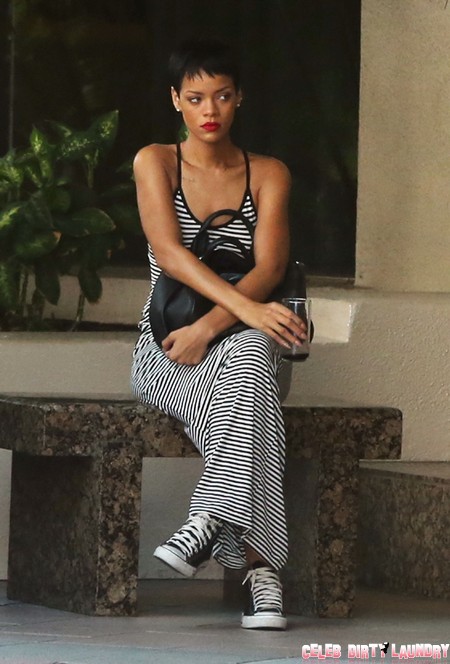 How does that age old saying go again? Fool me once, shame on you, fool me twice shame on me, but for Rihanna, fool me a million times, shame on all of you. Chris Brown has officially broken up with his girlfriend Karrueche Tran and said about the break-up, “I don’t want to see her hurt over my friendship with Rihanna. I have decided to be single to focus on my career. I love Karreuche very much.”

According to TMZ, this shocking announcement came “after Brown and Rihanna were spotted at the Jay-Z concert in Brooklyn last night.” The former jilted lovers had been spotted together on several occasions during the past few months and allegedly flirted until their eyes fell out at the MTV Video Music Awards.

Brown might be famous for his smooth dance moves and above average catchy tunes, but he is infamous for his chauvinistic treatment of women. The hot-headed singer beat Rihanna to a despicable pulp a few years ago before the Grammy Awards. The world was astounded that a woman as strong and as popular as Rihanna was subjected to physical abuse. Millions of Rihanna fans boycotted Chris Brown and several radio stations refused to play his music. His career was literally brought to its knees during that period of time, but he somehow picked himself up from the proverbial music industry coffin and re-built his brand.

Therefore, it is no surprise that Brown might have cheated on Tran with Rihanna. Yes, we said it. We opened up Pandora’s Box and now all hell will rain down on us, but isn’t it odd that all of a sudden he broke up with Tran because of his “friendship” with Rihanna? A leopard never changes his spots and this Brown leopard won’t be going to a zebra party anytime soon.

Was the first time not bad enough for Rihanna? Why is she returning to Brown? Yes, she might still love him, but this is still one of the most idiotic things she could ever do. Don’t go back Ri-Ri – forgiveness does not solidify a new relationship in any shape or form. Let us know in the comments what you think.