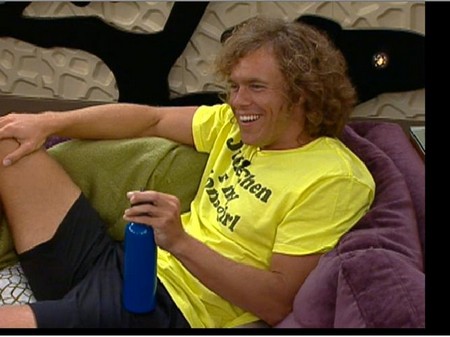 Tonight is another new episode of Big Brother 14 on CBS. Tonight we will see the second nominations for eviction when Frank who won the last HOH competition has to decide who he wants to put up for eviction. If you missed the last episode, you can read our full and detailed recap here.

On the last episode Britney told Willie that she thought the coaches would be put back into the game after she did some calculating and noticed there are two extra weeks. Willie doesn’t waste time in meeting with the house guests, excluding coaches, and tells them that he thinks they are being pitted against each other.

Willie and Frank argue because Britney reveals to Willie that Frank is turning the whole house against him. Willie calls Frank a low life and tells him that he hopes he goes home, then he tells the rest of the house guests to vote him out. Boogie gets upset and calls Willie a bully, Boogie then asks the rest of the house guests if they are going to tolerate a bully in the house.  In the end, Kara is eliminated and new HOH competition makes Frank the new HOH.

Tonight the house explodes when one “uber confident” house guest is sent home for head butting another house guest. You can read our major spoilers here to find out all the juicy details.

Frank has a big job in front of him tonight as he has the responsibility of putting up two house guests for eviction, in the end he chooses Shane and JoJo.  We will also see the latest Coaches’ competition.  I am guessing most of the show is going to be about the removal of a house guest from the show.

Big Brother airs tonight and we will see how Frank came to the decision he made for his nominations, we will be live blogging the show with all the up-to-the-minute details so make sure to come back to Celeb Dirty Laundry and watch the show with us.

I’m looking forward to seeing how the Big Brother spoiler comes to pass, what about you?

Tonight’s recap:  Dan is down to one player now and if Danielle goes he is out.  He is not too worried because he knows anything can happen.  Boogie and Frank are so pleased – he thinks the reason Frank was kept in the house is the house wants Willie gone!

Boogie and Frank cannot believe how lucky they are.  Willie is really upset he thinks the worse thing that could have happened this week.

Shane is debating whether he should break his alliance with Willie, he thinks he is a hot head that respects no one.  Janelle is upset with Britney because she cannot control her players.  Janelle tells Britney that the whole house wants Willie house.  Britney is upset because she feels embarrassed by Willie and does not really even want to speak to him.

Dan is not panicked yet, because he has one player.  He thinks there is always hope.  Jojo goes to see Frank and apologies to him.  She tells him that Willie made a mess of things.  Frank tells her he holds no personal grudges for anyone.

The house goes to see Frank’s HoH room.  Willie does not really want to go because he is not a fake person.  The house guests go to his room and ooh and ahhh over his room.  Because Boogie is Frank’s coach he gets a nice room.  Boogie is happy there is a picture of his 9 month son Brady in the room.

Willie comes up to the room but does not stay long because he is uncomfortable.  Willie comes to see Britney – she tells him nothing good is happening.  Britney tells Willie she made herself look bad by telling everyone he was a nice guy. Britney tells him he is selfish.

Willie will not listen, he tells her he came to play alone and not as a team.  Britney tell him the reason he would go home is that he cannot keep his big mouth shut.  Britney feels sorry for herself and tells Willie their team is screwed.

Shane and Danielle are flirting up a storm and everyone thinks it is cute.  It is a nice difference from all the drama in the house for the house guests.

Britney, Boogie and Dan meet – they are talking about that for the Coach’s competition they can save or swap out a team member.  Boogie is afraid that if Britney wins the coach’s competition she will dump Willie on Dan or him.  He tries to manipulate Britney into agreeing not to trade Willie.  Britney is not stupid and she does not buy Boogie’s crap.

Ian came to see Boogie and tell him he wants to go for a date with Ashley. Boogie thinks he has not chance at all but then he thinks maybe it is a good idea.  Perhaps if he dates Ashley he may get more comfortable.

So the guys talk him into it and he asks Ashley and she decide to say yes and gives him a chance.  Ian thinks she is the hottest girl he has ever taken out.  Ahhhhh, he is sweet he brought her a flower.  Ian is happy he think it is going great and he thinks a showmance will help his game.

It’s time for the coach’s competition.  There is a urban setup – and the coach’s are dressed up like 90’s rap.  The winning coach gets to save on of their team members or trade one and gets to choose the four have nots for the week.

Janelle wins the coach’s competition.  She decides not to trade any of her players and she decides to save Ashley this week.  The four players who are have nots for the week: JoJo, Ian, Shane and Willie.

America’s vote for a treat for the have nots and they are getting pork rings and pudding.  Britney tells Jojo if Willie speaks to her don’t go anywhere with him.  Jojo knows it won’t be good if she associates herself with Willie.

Britney goes up to Willie and tells him he is putting everyone in jeopardy and he should just stop.  Britney keeps taunting Willie.  Willie is going upstairs to fix the fact that people are getting blamed for his behavior.  Willie goes and tells the other house members it was all his fault and not to blame anyone else.

Jojo does not understand why she and Shane has to go down because of Willie.  Willie comes in and Jojo tells him she cannot associated herself with him.  JoJo goes into the diary room and says she feels sorry for Willie.  Okay, I don’t buy that.

Willie is pacing and getting frustrated.  Shane and JoJo are in the kitchen and Willie comes in.  No one is talking to him.  Willie says he has never seen a bigger bunch of ??!!!  Britney asks why he is acting that way.  Joe is in the kitchen and he walks away and makes a comment.  Willie is already pissed and he runs after Joe.  He keeps telling Joe to hit him – he head butts Joe.  There is a voice and it tells Willie to go to the diary room NOW.

When Willie get in the DR room he is asked to come with them.

Britney is crying lots of crocodile tears.  Ughh not sure what is her problem, she totally set this situation up.

Boogie wonders what they are going to do.

Julie comes on and asks the house guest to gather in the living room.  She tells them violence is not permitted in the Big Brother House and Willie has been removed from the game.

Someone hit Britney please!  She says she is glad to have him gone, but now she is worried what it means for her team.  Shane thinks Willie walking out makes it bad for Shane and JoJo.

Joe has a lot of mixed emotions, he is still thinking about his game.  Wednesday we will find out who is up for eviction and who wins power of Veto!