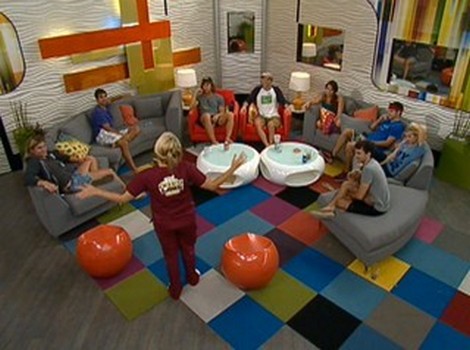 Tonight is another new episode of Big Brother 14 on CBS. Tonight we will get to find out HoH Frank’s decision and who he will nominate for eviction. If you missed the last episode (Live Eviction), you can read our full and detailed recap here for you.

Last week we found out just how much power Mike “Boogie” actually had in the house since he masterminded Janelle was back-doored.  The Silent Six – Dan, Danielle, Boogie, Frank, Britney, and Shane are successful and  Janelle was caught off guard and sent home.

Boogie was also thrilled when Frank walked away with the HoH.  So we all know that Boogie is calling the shots now and once again Frank avoids eviction.

On tonight’s show with the house divided Frank announces his nominations for eviction.  If you must know we spoiled it for you and you can find out who he nominates HERE!   Of course the nominees will have a chance to save themselves at the PoV competition.  What do you think will The Silent Six survive another week?  Will they continue to stay aligned and pick off the other players one by one?

Tonight’s show: Joe was completely blind sided, he didn’t know that Janelle was going to be sent home and realizes that he is all on his own now.

Boogie and Frank are celebrating the eviction of Janelle, in private of course. Britney thinks Frank is going to win the game because he keeps winning and confides in Danielle that she doesn’t know if they did the right thing.

Frank wants to get rid of Dan, but Boogie disagrees and thinks Dan could be a good person to have on their side if anyone of them ends up getting on the block. Frank shows off his HOH room, again, this time he reads a letter from his nana to the house guests.

Frank, Boogie and Dan talk about putting a pawn up, Shane’s name gets mentioned then Boogie asks Dan if he will volunteer, but Dan’s says no. Can you blame him? We all know that pawns end up getting booted out.

Boogie and Britney discuss how Danielle is not a morning person and they are surprised that she is a teacher if she can’t wake up in the morning. Boogie has it all figured out, he believes she is a nurse.

It’s time for the first “Have Not”competition of the summer. The house guests enter the back yard and it looks like a lemon/lime magical garden. Each team has to head over to the citrus oasis and soak up the juice, then their farmer has to squeeze it out.

The “Have Not” house guests enter the house after the competition and find out that America has voted for them to have candy canes and cod fish for the week.

Joe takes a little one-on-one time with Frank and basically throws Wil under the bus to save himself. Wil then approaches Frank and Boogie regarding going up on the block and Boogie tells him that he really doesn’t want to see him gone. Boogie doesn’t like Wil’s arrogant brash behaviour and thinks he will come after the two of them hard core if he is not sent home. Frank still wants to put up Dan and thinks he makes the decisions, but we know that Boogie is the ring leader and Frank is going to do what Boogie wants him to. Meanwhile, Boogie doesn’t like how Frank keeps mentioning Dan’s name and hopes Frank is not going to put him up.

Time for the Nomination Ceremony and Frank does exactly as Boogie wanted him to, he nominated Wil and Joe for eviction.

Who will win the POV, find out Wednesday at 8pm when we live blog the episode with all the up-to-the-minute results.