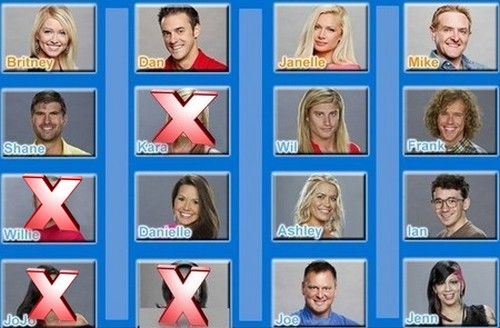 Tonight is another new episode of Big Brother 14 on CBS. Tonight we will get to see who the next house guest is to be evicted – remember last week no one was voted out.  We will also have another HoH competition.  If you missed the last episode (PoV competition), you can read our full and detailed recap here for you.

On the last episode Danielle won the PoV and Danielle decided to use the PoV to save Wil and she put up Janelle. Britney is a great actress, she looked straight at Janelle in complete shock like she knew nothing about this.  But we all knew she did!

On tonight’s show we will find out whether Janelle Pierzina or Frank Eudy will be evicted from the Big Brother house.  If Jenelle gets eliminated tonight she will be the first coach going home and it will make Boogie very happy!   Frank is so confident he is not going home tonight he does not even pack his bag.  But as everyone knows the person leaving really won’t be known until Julie Chen announces it tonight!

Once the elimination is over we will be on to the next HoH competition.  If Frank survives tonight I am sure he is going to be fighting for the HoH.  After being put up three times he has to know his luck is going to finally run out.

Tonight’s Show: It’s day 34 in the Big Brother house and tonight it is the first live eviction since the coaches entered the game. Boogie masterminded to blind side fellow former coach, Janelle, will she be sent home tonight?
Boogie’s back in power, even when he’s not the HOH, he’s still making the decisions in the house.

Everybody back stabbed Janelle and now they are all acting like they are shocked and can’t believe that she was put up on the block. According to how many people that Janelle spoke to after being put up on the block, there is no way that she is going home, everyone has told her that she has their vote to stay in the house. We definitely have the best bunch of liars in Big Brother history if she goes home.

Britney is having second thoughts, she can’t stand backstabbing and lying to Janelle, she just may cave in.
Julie gives us a look back at Ian being a dog for a day, which was just hilarious. Julie goes on to ask him how he is enjoying the experience and he says he loves it.

Ashley may come off as a dumb blond, but Julie who talks to her mom who says that she really isn’t like that in real life.

Time for the house guests to cast their votes and both Frank and Janelle get to give their last pitch for votes, Frank tells them to keep it classy. Boogie is up first, no surprise that he votes to evict Janelle. Jenn was aligned with Frank, where is her allegiance now, it’s still with Frank, she votes to evict Janelle. Joe votes for Frank, Wil votes for Janelle; that’s three votes against Janelle already.

With a vote of 8-1, Janelle is evicted from the Big Brother house.

It’s a new opportunity for another house guest to win HOH. This week’s competition is Big Brother Battle of the Bands, where they have to listen to music and determine whether that music describes either a HOH, Coach or VETO competition.

One by one the house guests are eliminated until there is Britney and Frank left standing. The new HOH for this week is Frank.

Don’t forget to come right back here to CDL on Sunday night when we find out who Frank, or should I say Boogie, puts up for eviction.