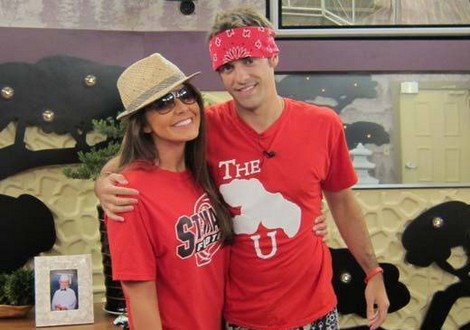 Tonight is another new episode of Big Brother 14 on CBS. Tonight we will get to see the conclusion of last week’s double eviction and find out who will be nominated by the new HoH. If you missed the last episode (Live Eviction), you can read our full and detailed recap here for you.

On last show we lost not one but two players.  Mike “Boogie” who thought he was in control of the game got sent home.  Boogie never saw it coming because he really trusted Ian and he did not realize Ian was playing him.

Following his elimination we had the HoH and Ian won.  He put Frank and Ashley on the block for elimination.  The nominations quickly followed with a Veto competition that Frank won and took himself off the block.  Ian replaced Frank’s nomination by Joe and after the vote Ashley was sent eliminated.

On tonight’s show we get to see the end of the double elimination, who is crowed HoH and who the new HoH nominates for eviction.  If you are one of those people who cannot wait we already spoiled the episode for you and you can find all the answers HERE!

With the double eviction of last week it guarantees us a week of drama and conflict.  Frank is all alone now that Boogie is gone but he is on a roll and it does not seem like he can lose a challenge.  Can he keep it up?   Week 7 sounds really exciting and you just don’t want to miss it!

Big Brother airs tonight at 8:00pm and we will be live blogging the show with all the up-to-the-minute details so make sure to come back to Celeb Dirty Laundry and watch the show with us. Can’t wait to see if there will be any more drama in the house, how about you?

Tonight’s episode: Boogie walking out the door was almost cutting Frank off at the knees, but the other house guests thought they were too tight and that is why they sent him packing. Ian was very uncomfortable having won the next HOH and only having minutes to put two people up for eviction, he put up Frank and Ashley. In the end, Frank won the POV, Joe was put up as a replacement and Ashley was sent home. Now the house has to fear the wrath of a very angry Frank. After Ashley leaves the house, Frank completely loses it because Ian sent home Ashley who he liked, to make the Quack Pack happy. Ian is feeling horrible, really guilty about what he did so to try cheer him up Dan tells him not to worry about sending Ashley home, he’ll set him up with his sister. What an idiot, does he think that will compensate Ian for losing a girl that he has a crush on?

Danielle approaches Frank and turns on the tears to get him on her side in case he wins HOH. Meanwhile, Britney and Shane talk about making a deal with Frank. Britney meets Frank in the supply room and tells him that she and Shane are with and unbelievably, he believes her.

It’s time for the next HOH competition and it looks like an elaborate bean bag toss, called “Hold Some Strings” where you instead have to roll balls into the slots using strings. The winner of this competition will be the sole Have Not for the week. Frank wins HOH, the Quack Pack just can’t get rid of him. Frank chooses Dan to be the Have Not for the week, meanwhile Britney is sick of Frank winning everything.

Frank opens Pandora’s Box, he opens the door and gets to choose three blocks that are worth money, he has an hour to do it. The first two blocks he chooses are worth less than $10.00, the third block is worth over $3,000.00.

As a result of opening Pandora’s Box, the rest of the house guests have a chance to win a Veto, but first the need fifty cents to play an arcade claw game. Dan has the first set of quarters and the first crack at the machine, but he fails miserably when he tries to play the game. Ian wins the Veto and Dan is upset that he couldn’t do it, even after multiple tries.

Frank meets with Ian and Britney and tells them that he is going to put up Dan and Danielle but he is worried that Ian will use his POV. The smartest move would be for Frank to put up Ian and back door Dan when Ian takes himself off the block, will he make a smart move or a dumb move?

Time for the nomination ceremony, Frank nominates Dan and Danielle, what an idiot! He had a chance to make an awesome move by backdooring Dan and he gave it up.

Dan has two last tricks in his hand, either get Ian to use his POV or win the next one himself.