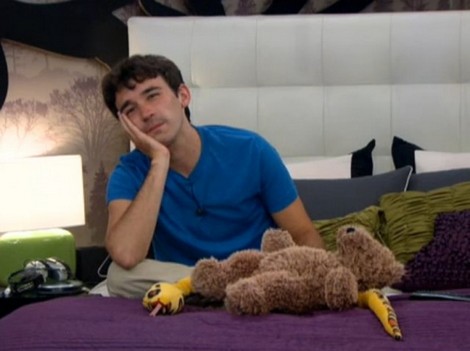 Tonight is another new episode of Big Brother 14 on CBS. Tonight we will get to see the HoH competition which was called “What day did this happen” and happened Thursday once the cameras went off.  We will also get to find out who is put up for eviction.   If you missed the last episode (Live Double Eviction), you can read our full and detailed recap here for you.

On last week’s show basically, Dan Gheesling stabbed  Frank Eudy in the back with the ultimate betrayal as Dan swore on his wife, his marriage and the bible that he would protect him.  Frank went home and the game continued.  We had another HoH, Dan.

He nominated Ian and Joe for eviction, then another PoV, which Ian won.  The replacement nominee was Danielle and then another eviction. Joe was the second house guest to go home.  Another HoH began but that was when the show was over.

Spoiler alert: If you’re one of those people who doesn’t like spoilers, stop reading now!   On tonight’s show Ian wins the HoH and you would think that Ian would put Dan up on the block but wrong!  Ian decides to nominate Shane and Jenn.  During the PoV competition Shane wins, who will Ian put up as a replacement?  I would put up Dan, but with Ian you never know.  Tonight we will get all the footage that we missed during the competitions and get caught up.

Big Brother airs tonight at 8:00pm with the live eviction, we will be live blogging the show with all the up-to-the-minute details so make sure to come back to Celeb Dirty Laundry and watch the show with us. Can’t wait to see if there will be any more drama in the house, how about you?

Tonight’s episode: Dan has made final two deals with most of the people in the house, but his true loyalty is only to himself. In the last episode, the Quack Pack sent Frank home and decided to fry the cook, Joe in a double eviction.

When Dan put up Ian for eviction in the last nominations, Ian thought he was being put up as a pawn, but Dan really wanted to backdoor him. Ian won the POV, so there went Dan’s master plan to get rid of him.

Meanwhile, Jenn is upset that Dan keeps telling her one thing and doing another. Ian confronts Dan and wants to know why he sent Joe home when he was one of the easiest floaters to get rid of, Ian thinks he should have gotten rid of Jenn who is a stronger player. Jenn’s anger is only mounting, she really thinks everybody is against her in the house.

Dan continues to work on Ian and do damage control because he has a sick feeling the Ian is going to win the next HoH. It’s time for the next HoH competition that’s called “Memory Lane”. Dan will remind the house guests about events that happened in the house and they will have to guess on which day it happened. Then, the house guests have to steer a ball into a hole and come as close as possible to the correct number. This is an important competition, it’s anyone’s game, but Ian is already in the lead. It’s a tie between Shane and Ian, they go to a tie breaking question. Dan is hoping that “Captain America” aka Shane pulls it out, otherwise Ian may put him up on the block. Ian wins HoH.

Jenn take the opportunity to tell Ian she stood by him and he recalls that she never put him up on the block, but other people did. Dan knows that he is an easy target for Ian so he goes to meet with him and tells him the best people to put up are Jenn and Shane, but Ian doesn’t know that he can justify it. HoH again and Ian gets another Pandora’s Box, it’s the first time in history that a house guest has gotten the box twice.

Ian opens up Pandora’s Box and finds a video message of love from his parents, but oh no it’s not them, it’s a video message from Rachel Reilly from Big Brother 12 and 13, she is going to give him advice on how to win the game. Ian doesn’t appreciate the advice, he feels more like he is on a bad date.

All of sudden, the other house guests start hearing their loved ones, their video messages are being played in the living room.

It’s time for the nominations, Danielle is safe, so is Dan. Ian has nominated Jenn and Shane for eviction and tells them both that it is not the nomination that counts, it’s the POV, so they have to play hard. We are going to have to wait until Wednesday to find out who wins the POV and who goes home in a special eviction episode.