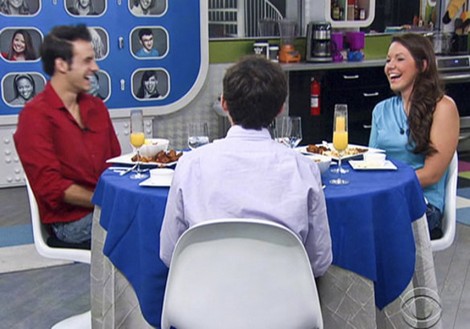 Tonight on CBS the finale of Big Brother 2012 Season 14 airs.  We get to see who goes home with all the money Dan Gheesling, Danielle Murphee or Ian Terry.  One of them will win $500,000, one will go home with $50,000 and the last will go home with nothing.

On last week’s show Dan continues to pull the strings in the house and even after he blindsided Danielle  he managed to turn the whole situation around and gain her trust again; he told her that he was trying to win her the money as her coach and anything else he just doesn’t care about.  By the end of Sunday’s show the final HoH called “Hook Like and Sinker” started. The house guests had to hang a ride on a fishing hook and hang on for dear life when they were dunked under water and banged against a wall. Big Brother made us wait till tonight for the 90-minute live finale to see how the rest plays out.  If you missed the episode you can read our full and detailed recap here!

On tonight’s show we get to see if Dan’s lying, scheming and manipulating pays off for him.  We also get to see that Danielle does not wake up and smell the coffee.  She really  has to be the dumbest player I have ever seen, she buys everything that Dan feeds her.

It seems tonight Dan convinces Danielle that it would be a good idea to convince Ian that they are mad at each other. Then Dan may throw the last HoH competition and lets Ian make the decision to send Danielle packing.  Yep after all the chances Danielle had to be in the final two the ‘dumb-dumb’ will probably go home with nada… So we believe it will be down to Ian and Dan in the final two –  who will win?  Well I think it is still a toss-up.  It depends on the jury and how they vote.  They are suppose to vote based on game play but… if personal feelings leak him then it is anyone’s game.  Who do you think will win?  Hit the comments and let us know your thoughts!

Big Brother airs tonight at 9:30pm with the finale, we will be live blogging the show with all the up-to-the-minute details so make sure to come back to Celeb Dirty Laundry and watch the show with us. Can’t wait to see how all the drama plays out, how about you?

Tonight’s episode: After a summer of outrageous behaviour tonight is the finale and we finally see who is going to walk away with the cash prize. When we left off last time, it was part 1 of the final HoH competition. Just before Shane was evicted, Dan made a final two deal with Ian that he is going to drop from the first round, but he also made a final two deal with Danielle. After 17 minutes, Ian drops. Dan asks for some time alone with Danielle, Ian leaves the back yard. Dan convinces Danielle that she should drop and he actually makes her idea. Dan wins round 1.

It’s time for round 2, the Danielle and Ian have to climb a sky scraper, clean windows to reveal pictures of evicted house guests and put them in order of who left first. The winner will battle it out with Dan in round 3. Danielle’s time is 7 minutes 31 seconds, Ian’s time is 6 minutes 4 seconds, Ian wins round 2 and one step closer to controlling his own destiny, unless of course that Dan has control of it!

Dan congratulates Ian in front of Danielle and she is upset about it. Danielle tells Ian that if he takes Dan to the final two she will taint the jury against him. Ian is also upset and doesn’t like to be threatened. The fight that Dan masterminded worked, now he only has to convince Ian that he should throw the first round and that way Dan will not take Danielle and she will be mad at him and not Ian.

In the jury house, they are waiting to see the next person that was evicted. Shane walks in and tells everyone that Dan convinced Danielle to use the PoV on him and Shane was backdoored. Everyone is shocked and Shane goes on to say that he thinks he was played by Danielle. Joe thinks Ian has played the best game and made tough decisions, Britney agrees. Shane doesn’t want to vote for Ian because he stabbed Boogie in the back. Jenn calls Ian a rat, the snitching thing makes her sick. Everyone seems to be against Danielle and they don’t think she deserves the money because she didn’t play her own game. Everyone thinks Dan has played an amazing game, he ran the house despite what he did to everyone personally, it is a game. Britney wants to know why Dan’s lives are any worse than anyone else’s. Jenn feels very strongly that Dan has played the best game.

It’s time for the final and third round of the HoH competition. It’s a question/answer challenge where Julie will ask the questions and the house guests have to answer A or B. Ian is the final HoH and gets to decide who he wants to sit beside in front of the jury. Ian has a big decision tonight, will he pick Dan or Danielle to sit beside him. Ian votes to evict Danielle, honoring his final two deal with Dan.

Here comes the jury, Ashley, Britney, Frank, Joe, Jenn, Shane and Danielle. Before the jury decides who they want to win, they have questions for Dan and Ian. Ashley wants to know if Ian made his own decision, he says that he did and Dan totally disagrees. Frank tells Dan that lying and backstabbing is ok, but is swearing on the bible and his wife pushing it a little far. Dan says it got him this far and he has no regrets. Jenn tells Ian that she doesn’t like snitches and why should she give him the money. Ian claims he was just trying to get information and flow it the right way for his game. Joe asks Dan what blood is on his hands. Dan tells him everybody’s, he lied to everyone, hosted his own funeral and it was ridiculous how much he blood he got on him but it’s because the house guests played so well. Britney wants to know why Ian should win. He tells her that he played a slightly cleaner game. Shane asked Dan why he should win over Ian. Dan says because he wasn’t controlled like Ian. Danielle asks Ian if he knew that Dan had a final two deal with her. Ian tells her that Dan gave him his grandfather’s gold cross to swear that he was true to his alliance for final two with him.

Ian has his final say, he tells the jury that he has a much better poker hand versus Dan. He’s played the game with probability, statistics and a little bit of heart.

Dan has his final say, he basically says that all the house guests were amazing and smart, he had no choice but to do despicable things to win. He played this game 24/7, he had to do what he had to do to get where he is and apologizes if anyone was offended but this wasn’t personal.

It’s time for the jury to cast their votes and Dan kisses butt right to the end, you just have to love this guy.

The other house guests have also returned on the panel; Janelle says that she loved Dan’s game play and he should win. Frank disagrees, he doesn’t respect Dan’s game. Boogie thinks Dan played an amazing game but he has a lot of respect for the game that Ian played.

Shane asks Danielle if she knew that he was going to be evicted, she says no and Dan collaborates it. Shane asks Dan why he did it. Dan says that he leaves his morals at the door.