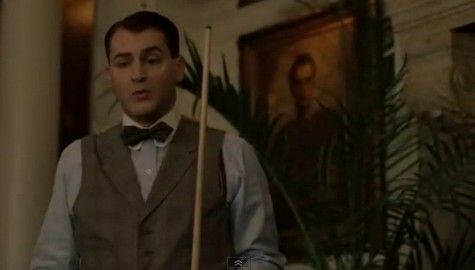 Last Night’s episode of BOARDWALK EMPIRE picked up right where it left off last week with everyone dealing with the aftermath of Babette’s blowing up.  Nucky spent the episode recovering from a concussion he suffered as a result of the explosion.   Nucky called a meeting of his friends/partners: Arnold Rothstein, Meyer Lansky, Lucky Luciano, Bill Lovett, Waxy Gordon to name a few.  His so called friends picked up on Nucky’s weakened state and refused to side with him in his war with Joe Masserai.  I can’t wait to see what Nucky does about the rats deserting him next week.  We have a sneak peek video and some spoilers to wet your appetite for next week’s episode 10  titled “A Man, A Plan.”

On last night’s show reeling from Gyp’s most recent attack, Nucky vowed to eliminate his nemesis through a coalition of familiar partners.  As Nucky’s friends desert what they see as a sinking ship Nucky is going to have to face Joe Masserrai and Gyp Rossetti alone next week.   In Washington, the arrest of a high-profile bootlegger put Daugherty and Jess Smith on the hot seat. Emily got a scaled-down birthday party; Gillian blamed an absent Harrow for Tommy’s latest misadventure; Gyp decided to buy a Tabor Height’s silence; Broadway mourned a fallen star.  Did you see the episode?  We did and we recapped it here for you!

Spoiler alert: If you’re one of those people who doesn’t like spoilers, stop reading now! We have some juicy spoilers for you about the season 3 episode 10 of HBO’s “Boardwalk Empire.”

Official HBO synopsis of next week’s episode:  Nucky reaches out to Gaston Means to keep Jess Smith quiet in Washington, and enlists Owen to neutralize Gyp’s alliance with Joe Masseria in New York. Margaret considers alternate futures, at the hospital and at home; Van Alden’s side business backfires; Gyp fumes when a shipment comes up short; Harrow coerces an apology for Julia; Chalky sees opportunity in the ashes of a boardwalk institution.

On next week’s episode with only three episodes left we are on the verge of a war. Or as Arnold Rothstein says, “We are on the verge of a war, a deal will always wait, and a fool will always rush in!”  Arnold is speaking to Lucky Luciano and Meyer Lansky when he says this and Lansky does not look impressed.   Nucky is trying to come up with a plan to break up Gyp’s alliance with Joe Masseria and Nucky tells Owen that he thought this was a bigger operation than Owen thinks it is.  Owen tells Nucky the job doesn’t call for an army.

Gyp is making a deal for 1,200 cases of liquor, which is a bigger order than Nucky’s.  Gyp assures everyone he will have no problems fulfilling it, but he is going to come up short. Gyp is a big talker, but he is going to have to do more than talking. Van Alden/George is having problems of his own, Al Capone finds out that Van Alden has been making a little extra liquor and selling it on the side.  Al has obviously found out and he cannot decide what to do about Van Alden.  Van Alden begs him not to do anything to him.  It looks like things get sticky for Van Alden. Lucky and Meyer go to Joe Masserai and tell him that Nucky is thinking of making a move.

Margaret and Owen are obviously planning to leave, but Owen warns Margaret that they cannot botch their plan, if Nucky finds out could be in big trouble.  It looks like Nucky does find out, he walks in on Margaret and Owen in a compromising situation.  I can’t wait to see how they try to convince Nucky it is all innocent.  I think Nucky already suspects something.

So what is Nucky going to do?  We know he has Chalky on his side – will we finally see Richard Harrow back Nucky?   Richard is one of my favorite characters and I would like to see him with Nucky and away from Gillian.  What do you think?  Who do you think is going to back Nucky?

Boardwalk Empire Season 3, Episode 10 “A Man, A Plan” airs on HBO on November 18th, 2012.   Check out the preview video  of episode 2 and let us know in the comments below what you think!