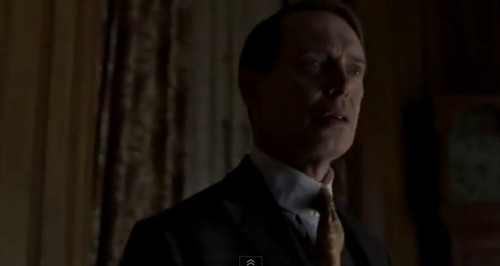 Tonight’s episode of BOARDWALK EMPIRE was fantastic, several unexpected things happened and some not unexpected.  Gyp continued to be a brutal sadist,  Margaret had some shocking news, both Harry and Nucky recruited Gaston to get rid of Jess and a whole lot more.  I cannot wait to see what happens next week after the explosive ending.  We have a sneak peek video and some spoilers to wet your appetite for next week’s episode 11  titled “Two Imposters.”

On last tonight’s 10th episode Nucky reached out to Gaston Means to keep Jess Smith quiet in Washington, and enlisted Owen to neutralize Gyp’s alliance with Joe Masseria in New York. Sadly things did not go as they planned.  Van Alden’s side business selling liquor backfired.  Al Capone took Van Alden to task and demanded that Van Alden tell him everything he knows about O’Banion.

Gyp fumed when a shipment came up short.  It seems the waves were huge when the boats carrying the liquor came in because of changing winds.   We got to see Gyp’s insane brutality once again. Chalky saw an opportunity in the ashes of a boardwalk institution.  He wanted to set up a high class club for Negros.  Nucky told him it was not the time.  Lucky Luciano and Meyer Lansky betrayed Nucky and went behind Arnold Rothstein’s back.  They approached Joe Masserai to partner with them on their heroin trade.  They offered Joe information on how Nucky was coming after him, if he agreed to partner with them.  Joe agreed and Lucky and Meyer gave Joe the info about Owen coming after Joe.  This led to disastrous and shocking results for Owen, Nucky and Margaret.  If you missed tonight’s episode you have to read our full and detailed recap here!

Spoiler alert: If you’re one of those people who doesn’t like spoilers, stop reading now! We have some juicy spoilers for you about the season 3 episode 11 of HBO’s “Boardwalk Empire.”

On next week’s episode things heat up in the preview video for next week.  We see Nucky’s guards dead and Kessler trying to use the phone, but the line is dead.  We hear Nucky’s voice saying, “It’s not safe, they are coming”  It looks like Gyp’s men are coming to get Nucky and finish it once and for all.  After Joe Masserai finding out Nucky was coming after him, I guess he has decided to get rid of Nucky and who better to use by Gyp.

The violence is escalating, Gyp comes to see Chalky and Dunn.  Gyp tells Chalky he will be running things and he was told Chalky was the man to see. Chalky does not look pleased by the situation.

Nucky is hiding out – he is with Chalky.  Chalky tells him he is “a dead man walking”, but Nucky tells him not yet.  Nucky tells him it is his town and he is not leaving.  There is a lot of shooting in the preview video and it seems Gyp is in Atlantic City and Gillian is cooperating.  Gillian also gets mad at Richard and throws him out of her house.

Nucky is looking for help and he offers someone anything they want.  I am hoping Richard and Chalky team up to help Nucky.  Meanwhile, Gyp is at Nucky’s house and has the dog he gave Margaret’s children.  He tells his men he wants Nucky in front of him, on his knees or on a slab. WOW!  Looks like a crazy episode, I cannot wait till next week.

Boardwalk Empire Season 3, Episode 11 “Two Imposters” airs on HBO on November 25th, 2012.   Check out the preview video  of episode 11 and let us know in the comments below what you think!