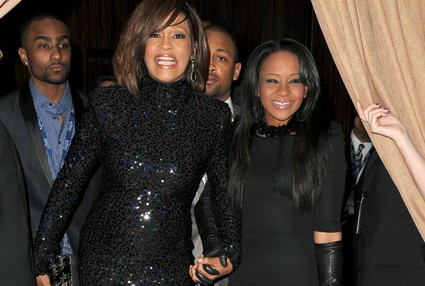 Oprah Winfrey is a vulture and she has swooped in and convinced Whitney Houston’s vulnerable daughter, Bobbi Kristina, to appear on her show and discuss her mother’s death.  You have to be disgusted with Oprah and Bobbi Kristina – I mean poor Whitney is barely in the grave and they are out there capitalizing on the tragedy.  What makes it even worse is that as we exposed on celebdirtylaundry.com Sunday, Whitney hated Oprah.

It looks like Oprah has one-half of Whitney’s family lined up to do the show.  What are these people thinking?  Are they that desperate for cash and publicity?  Will they discuss Whitney’s resentment towards her mother, Cissy Houston, for breaking up her lesbian relationship with her first galpal?  Whatever happens on the show, it is a brutal slap in the face to Whitney and all those who truly loved her.

Contact Music Reports:  Bobbi Kristina, the daughter of the late Whitney Houston, will open up about her mother’s death in an exclusive interview with Oprah Winfrey for a television special. The show, set to be broadcast on the Oprah Winfrey Network, will also feature numerous other family members, reports the Associated Press.

As well as an extended chat with Bobbi Kristina about her relationship with mother Whitney, ‘Oprah’s next Chapter’ will also feature chats with Houston’s sister-in-law Patricia as well as her brother Gary. The show is scheduled to air on March 11, 2012. Superstar singer Whitney Houston was found dead in a bathtub at the Beverly Hilton Hotel on February 11, 2012. An exact cause of death has yet to be determined, though early reports suggested the singer may have taken prescription drugs. Daughter Bobbi was with her mother in the same hotel at the time of her death, and was hospitalized shortly afterwards. A Huffington Post report suggested she had disappeared after Whitney’s funeral in Newark, New Jersey, having been overcome with emotion. The aspiring singer turns 19-years-old on Sunday (March 11, 2012).

Bobbi Kristina’s father Bobby Brown abruptly left Whitney’s funeral after a dispute over seating arrangements. He had joined his band-mates in New Edition back on-stage within 24 hours.

Do you approve of Oprah snagging this interview?  Let us know in the comment section below.