Booze And Drugs Bombshell: Brad Pitt Walks Out On Angelina Jolie – Wedding Off 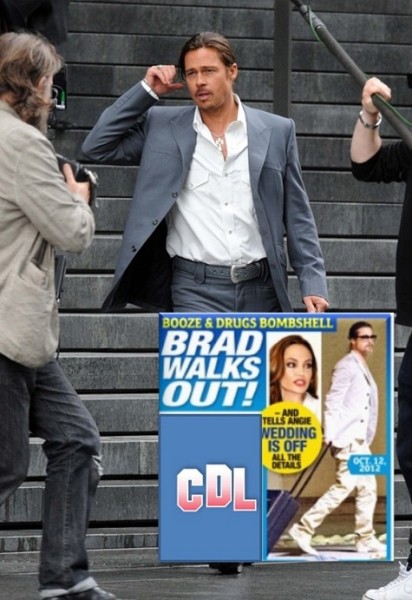 Oh we couldn’t have a day of Jennifer Aniston planning an over-the-top, boozy wedding without news that Brad Pitt walks out on Angelina Jolie – wedding be damned! But that’s the play this week from the National Enquirer. Apparently Brad is so disgusted with Angelina’s drug and alcohol habits that he’s finally had enough. No Brad! Chelsea Handler can’t win! Her recent comments about you regretting Angelina cannot be true!

So can the wedding really be off? I’m not so sure. After Brad’s latest drug comments, I doubt he’ll pull the plug on his lady love because she might overindulge every once in awhile. People have their things. Obviously Angie doesn’t eat so maybe she likes to drink. Lay off Brad! She’s got like ten kids! That’s a lot of stress! But really, how can Angelina have a booze and drug bombshell? I thought she was having liver problems?

Brad might just be a little pissy because Angie keeps shuffling her feet down the aisle. Apparently whenever Brad wants to solidify plans Angie just laughs and changes the subject citing that she’s too busy. Seriously, Brad can be such a girl sometimes. Have you seen his new Chanel ad? He’s having a bad week. That shit’s embarrassing. If I were Angelina, I would have picked up the bottle after sitting through that nonsense.

But still… call off the wedding? Brad Pitt won’t be doing any of that. Angelina’s firmly in charge of that relationship. If he regrets anything from leaving Jennifer Aniston, it’s that he gave up the upper hand so Chelsea Handler might have been slightly right after all. But don’t give her too much credit, even a broken clock is right twice a day.

Do you believe that Brad Pitt would ever leave Angelina? Do you think he’s the kind of guy that would stay for the kids?