Boozy, Binge-Eating Oprah Fired From Her OWN Network! 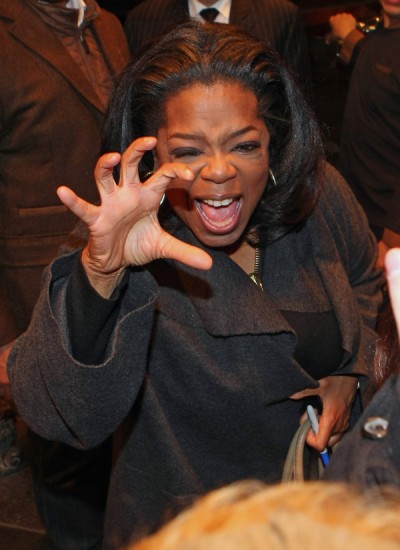 Oprah has been “stripped of her power” and effectively fired from making executive decisions for her struggling network, OWN and is turning to booze and food to cope with the stress. Oprah launched the network in 2011 but the Queen of Media has had a difficult time getting people to watch her crap shows which include memorable gems such as Miracle Detectives and Kidnapped by the Kids.

The Almighty O jumped into running a network with virtually no experience and the peeps who are higher up (yes, Oprah has to answer to people other than God) are all like “Beloved sucked, so why do you think you can run a network? Just give us some of your favorite things, damnit!”

OK, maybe it didn’t go exactly that way but Oprah was all up in tears over the fact she’s getting ousted. “Oprah’s situation is equivalent to Donald Trump telling one of his ‘Celebrity Apprentice’ contestants: ‘You’re fired!'” a source told the National Enquirer. “They now realize that she was too inexperienced to run the net­work. So she was stripped of her power. She’s no longer in a position to make executive decisions or hire staff without consulting top Discovery executives first.”

Discovery Communications owns the OWN network and bigwigs there are allowing Opes to keep her CEO title as long as she stops hemorrhaging money.

But now her friends, like are they or aren’t they bestie, Gayle King, are worried for Oprah’s health. CDL reported in recent months that Oprah’s weight has ballooned up to 280 pounds and she’s binge-eating again due to all the stress. “She was completely humiliated by the decision to have her step down,” the insider said. “For Oprah, this is a bitter personal failure and a devastating blow to her ego. The unexpected demotion has sent her into an emotional tailspin so severe that friends are deeply concerned for her. They fear it could trigger one of her drinking and eating binges.”

Poor Opes!! But isn’t it weird that her weight is the first thing people are worried about, over her bank account or her pride? Why oh why did you have to wheel all of your fat out that one day, Oprah? Everything always has to come back to the pounds!

OK, so she doesn’t have full executive powers anymore. So what? Now she has more time to relax and go on more camping trips with Gayle; try all of Baskin Robbins’ 31 flavors; and return some emails. I’ve been waiting so long. Why won’t she ever write me back?!