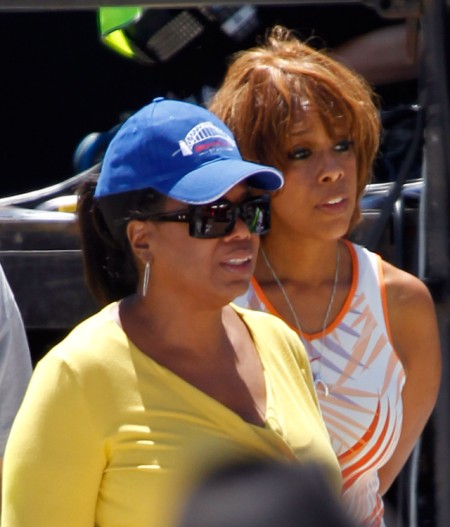 Gayle King says bestie Oprah Winfrey is the ultimate catch and she would totally put a ring on it… if she was a man.  Oprah’s best friend told the New York Times that marriage to the Big O would be easy as pie.

“She has all the qualities you would want in a spouse,” she said. “Somebody who is successful, who cheers you on, understands you, cares about you, supports you, who’s honest with you. There’s nothing difficult about her. Nothing.”

But she can be difficult on other people. And Gayle mentioned Oprah’s reticence to get behind her 1982 wedding to now ex-husband, Bill Bumpus. A few years ago Oprah confided, “There are some weddings you go to and you’re filled with all this hope for the couple. I didn’t feel that at yours….It just felt kind of pitiful.”  Harsh!

But Gayle took the comment in stride. “That was a surprise to me. It’s only because Oprah knows every single detail about my marriage that I wasn’t offended. And if she would’ve told me at the time, I wouldn’t have believed it. I was in love with somebody and thought that was it.”

This interview is sure to spark the are they or aren’t they whispers that have dogged these two women for years. Oprah and Gayle can’t go anywhere together without people claiming they’re lesbians and that Stedman Graham is Oprah’s beard. I still don’t think they are hiding anything. They are just really good friends. What do you think? Is this just an honest interview or should Gayle be a little more careful of what she says about her famous girlfriend?