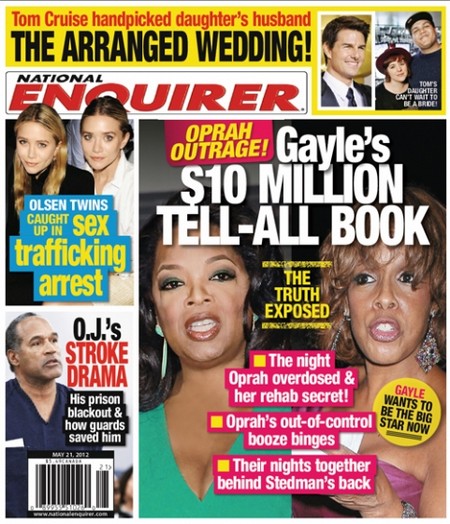 Oprah Winfrey’s long-time companion Gayle King has exposed their wild nights together behind Stedman’s back as well as Oprah’s drug overdose and secret rehabilitation.  But Gayle doesn’t stop there in her $10 million tell-all book about her former boss.  Apparently Oprah also indulged in out of control booze binges and many other shameful activities – Gayle wants to be the ‘big star now’ and she is prepared to step all over Oprah to attain her goal.

This week’s cover of The National Enquirer promises to reveal the entire Oprah outrage as Gayle spills all the truth (and probably more) in a $10 million tell-all book.  I’ll bet Oprah won’t be leaving any copies of this week’s Enquirer lying around her living room…

Oprah has long had questions about her sexuality thrown around the media and it seems that we will learn more now.  As far as Oprah’s drug overdose and subsequent secret rehab – we can this – there are no secrets in Hollywood!  Let’s not forget that The Enquirer broke the John Travolta sexual battery case long before the main-stream media got a clue.  So unless we know we shouldn’t say ‘no.’  And at CDL that is our motto – ‘don’t say no unless you know!’

The Enquirer also promises to reveal  Hulk Hogan’s sex tape shocker.  What could the shock be?  That the hulkster likes men?

The mag also threatens to tell us all about O.J. Simpson’s stroke drama – he blacked out but guards saved him!  Poor O.J. – the moron beats a murder rap of which he was obviously totally guilty and winds up getting a huge prison sentence for stealing some souvenirs… I mean you gotta ask.

There is lots more great stuff in this week’s Enquirer and we’ll be blabbing about it as the week goes on.  So come on back to CDL for more hot gossip!