Was Bobbi Kristina Stoned And Drunk On Oprah? (Video) 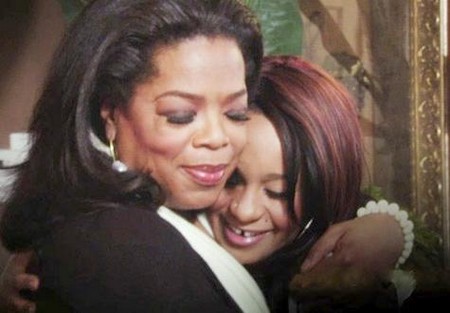 Suggestions are buzzing around the web that Kristina Houston, formerly known as Bobbi Kristina Brown, was ‘under the influence’ during her TV interview with Oprah Winfrey about Whitney Houston’s death.  In fact people are saying that Oprah the vulture suggested it during the interview.  A great irony here is that Whitney hated Oprah and yet her daughter and close family just couldn’t say no to the money and temporary fame of being on ‘Oprah.’  How pathetic.

The poor kid definitely has a past full of substance abuse but to suggest that she was using and stoned during the interview is a stretch.  Bobbi Kristina is now most likely under psychiatric care and is simply taking her prescribed medication – which is a legal way of staying stoned most of the time.

One blog that said that Bobbi Kristina was ‘under the influence’ during the interview is quoted below: Oprah Winfrey scored the first exclusive interview with the only child of Whitney Houston, who passed away last month at age 48. The special aired on Oprah’s OWN network tonight. Bobbi Kristina appeared briefly and spoke to Oprah about carrying on her mother’s legacy. The 19-year-old said she can still hear Whitney singing, and sometimes she forgets that Whitney is gone.

During the interview, which was conducted in the Alpharetta home of Whitney’s close friend and sister-in-law, Pat Houston, Kristina appeared tense, but happy. She smiled often and she appeared to be under the influence. Oprah hinted at that much: “What’s getting you through it?” she asked.

“My family and the Lord and her. I can hear her in my head,” said Kristina.

Kristina also said she felt Whitney’s spiritual presence in the Alpharetta townhouse that they once shared. Kristina said she has conversations with Whitney, who flips the lights on and off in the house.

“I’m like, ‘mom, what are you doing?’” Kristina said she asks Whitney.

Oprah also spent a great deal of time talking with Whitney’s sister-in-law, Pat, who threw daggers at ‘X-Factor’ contestant Stacy Francis, with whom Whitney argued over Ray J. Pat also threw Ray J under the bus by suggesting that Whitney found love in all the wrong places.

Earlier today, TMZ.com broke the news that Bobbi Kristina will seek to change her name to simply “Kristina Houston,” in an effort to sever all ties with her father, Bobby Brown.

The Oprah interview also provided the opportunity for Whitney’s sister-in-law and manager, Patricia Houston, to voice her concern that Whitney died under suspicious and possibly criminal circumstances.  The whole circus surrounding Whitney’s death is truly nauseating.  During her sad life Whitney never found a single person who cared enough about her and was close enough to her to save her.  Now everyone is an expert.