Patricia Houston Suggests On Oprah That Whitney Houston Was Murdered 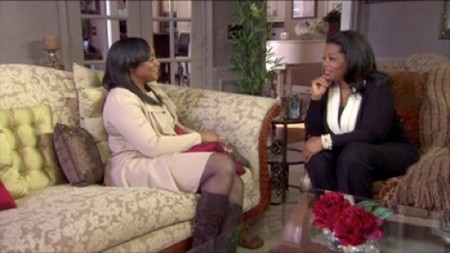 Whitney Houston’s sister-in-law and manager Patricia Houston has joined others in suggesting that foul play was involved in Whitney’s death.  Although the Los Angeles Coroner has not said that Whitney’s death is being treated as a murder, the office did confirm that calls and emails it has received suggesting foul play are being taken seriously.

In her televised interview with Oprah that aired Sunday night Pat shocked everyone by saying:  “Don’t know how she got in the tub – I just know they had to pull her out of the tub.”

Publicly expressed concern by her own close relative and manager that Whitney might have been murdered is chilling, to say the least.  It adds a terrifying weight to other theories that suggest that Whitney’s death was not the result of a simple ‘accidental overdose.’

We previously reported that Whitney’s death ‘smacks of a hitman’s revenge’ as a law enforcement source, former Chicago policeman Paul Huebl told GLOBE Mag.  This theory agrees with what her former sister-in-law Leolah Brown, others, and now Patricia believe was a non-accidental death for Whitney.

Whitney allegedly owed big money to some bad people said the former cop:   “You don’t get away with owing that much money to vicious drug dealers and live to tell the tale.   And they know how to cover up their crime by making it look like an accident – like a drowning in the bathtub.”

Keep in mind that the Los Angeles County Coroner revealed last week that they received multiple calls and emails from relatives of Bobby Brown as well as Whitney Houston‘s family demanding a murder investigation.  The Coroner’s Office says the investigation is ongoing and the new information is being taken very seriously.

Paul is currently a Hollywood private detective and described to GLOBE in their print edition, March 19, how easy it would have been to set Whitney up for murder due to her addiction to drugs, alcohol, and partying.

Paul said:   “It would be easy for a hitman to get her loaded and overwhelm her, dunk her head in a bathtub and hold her underwater until, she died.”

A family insider says that Leolah fears Whitney was murdered.  Another family source says:   “Leolah’s told the cops she believes Whitney was taken by surprise and killed.  She is telling pals that the cops are taking what she has to say seriously.”

Until the coroner makes his findings public rumors and theories will continue to swirl about.  Others suggest that Whitney’s death was a suicide – and that is certainly plausible.

Whitney was full of drugs and booze and died without anyone in her entourage noticing… in a bathtub… hmmm.  Where were her friends and family?  Were illegal drugs removed from the hotel suite before police arrived?  And if so, by whom?  People as close as Whitney’s sister-in-law and manager as well as her former sister-in-law do not accept the conventional wisdom that says Whitney simply overdosed and drowned all ON HER OWN! Who was looking out for Whitney?  What really happened?   What do you think?  Was foul play involved in Whitney’s death?