Evidence That Whitney Houston’s Death Was A Suicide (Photo) 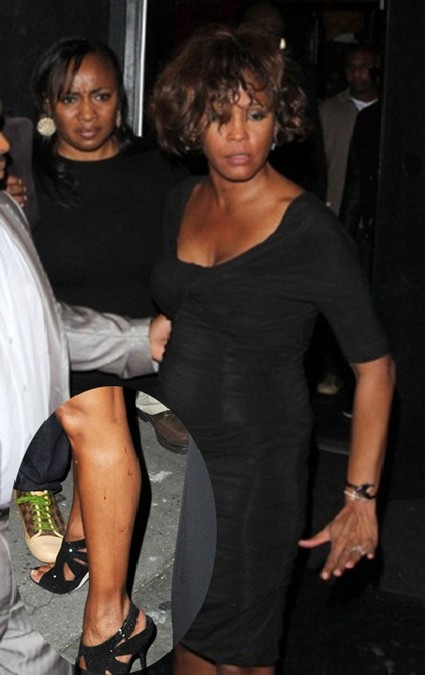 There is solid evidence that Whitney Houston‘s death was a suicide. Whitney Houston died in the bathtub of her hotel suite on February 12 after apparently consuming a lethal cocktail of Xanax, alcohol, and possibly other drugs including cocaine. She either overdosed and had a heart attack or slipped unconscious under the water in her bath and drowned – we await the final coroner’s report including the toxicology results. In either case it was Whitney herself who took the dope and caused her own death. Suicide seems very possible since Whitney both threatened suicide and made an attempt at suicide in the days leading up to her death.

Star mag print edition March 5, 2012 reports:  Star magazine has learned that for those around Whitney her death was tragic but not entirely unexpected.

Just two days before her death sources say that Whitney tried to take her own life. Whitney made a last desperate cry for help when she attempted to slit her wrists in the bathroom of L.A.’s Tru Hollywood nightclub on February 9, sources reveal. Following an embarrassing public altercation with X Factor star Stacy Francis, Whitney disappeared into a bathroom, and when she reappeared, a source says, ‘there was blood all over her, from her hands, wrists and legs, and there was a blade in her hand.’

A member of Whitney’s entourage tells Star how the erratic Grammy winner had threatened to seek the ‘ultimate revenge’ on her mentor, Clive Davis, because he had recently cut the drug-addled star off financially.

According to sources several people close to Whitney confronted him to stop enabling her by giving her unlimited supplies of cash.

‘He was handing over $500,000 to $1 million at a time,’ a member of Whitney’s entourage tells Star, ‘but Whitney was partying it away. Clive had to be told that having money coming in so frequently was not helping Whitney get back on track. it was only making things worse.’

About two weeks before her death Clive finally sat down to tell her it was time for tough love. ‘When Clive told her he was cutting her off, Whitney really just spun out of control,’ the insider says. ‘She told her friend s that since she wasn’t getting any more money from him, she was going to party it up one last time.’

According to a source close to Whitney’s on-off boyfriend Ray-J, ‘She even claimed she was going to overdose on cocaine, booze, and pills right before Clive’s Grammy party. She said she’d really “show him.”‘

‘Ray did what he could to convince Whitney that this was not the thing to do,’ the source says. ‘But deep down, he didn’t believe she’d go through with it. He thought it was just the drugs talking.’

Star has reported that cocaine was just one of the many substances present in Whitney’s hotel room at the time of her death, although handlers removed it before the cops arrived. Now authorities are investigating whether Whitney deliberately overdosed on cocaine or a cocktail of substances, causing her own death

It’s hard to know if all the details are accurate but there is ample evidence to suggest that Whitney’s death was a suicide. Junkies often become deeply depressed when they consider how they have destroyed their lives and damaged the lives of those around them. Whitney had to face a Grammy party full of top celebs and hosted by her mentor, Clive Davis, knowing that she was a mere shadow of herself, a broken junkie with a ruined voice. Also, she knew that she was responsible for her wayward daughter, Bobbi Kristina, being well on her own way to permanent drug addiction. Did Whitney Houston take her own life – we think it is reasonable to assume that she did.