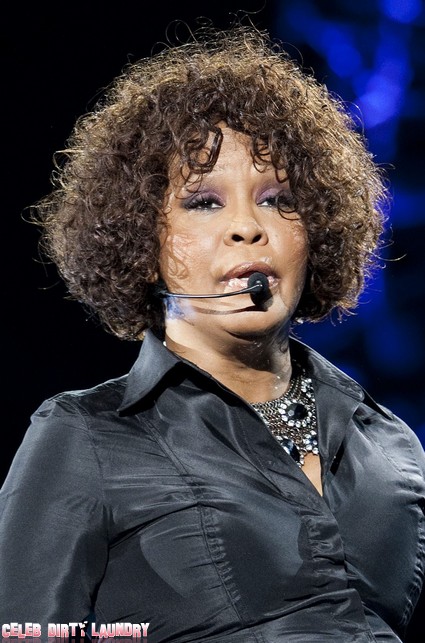 Whitney Houston was so addicted to drugs that she had an established network of drug dealers satisfying her needs all across the USA and Europe – according to the latest edition of Globe Mag. Sources reveal that Whitney’s cocaine consumption was so out of control that her dealers were actually shocked by the size of her habit. Even worse is that one of Whitney’s dealers claims that Bobby Brown used to pick up the cocaine orders for her.

According to the Globe print edition, March 5, 2012:  Drug dealer Uncle Rob said he told Whitney: ‘I told her, You’re doing too much, You’ve got to slow down.’

At first he delivered drugs through an intermediary, but as 1990’s began, a relative of Whitney’s made the pickups at Uncle Rob’s place in Irvington, NJ.  After Whitney married Bobby Brown in 1992 he moved into her estate in Mendham, NJ, her R&B star hubby would pick up supplies of cocaine, he says.

Uncle Rob stopped selling to Whitney in May of 2000, after her dealer was identified as a guy called ‘Rob’ and he feared cops would close in on him.  He estimates during the decade they did business she shelled out a staggering $750,000 to him alone.

Sources told the Globe: Whitney had other suppliers in Chicago, Los Angeles, and in Miami. In Atlanta where Whitney lived for many years, she had countless dealers and ‘friends’ who delivered drugs to her home.

A party promoter named Marlon David said that during Whitney’s ‘Nothing But Love’ comeback tour he made drug sales to her. David claims that when Whitney was in Denmark for her June 3 and 4 performances in Copenhagen her team was ordering vast quantities of illegal substances.

A Swiss-based friend of David’s delivered $6000 worth of cocaine and Adderall to her hotel room in Copenhagen.

At that time David made a chilling prediction. He said: ‘She’s going to go the way of many brilliant but tragic singers – to an early grave.’

By the time Whitney was found dead in her Beverly Hills hotel bathtub she owed $1.5 million to ruthless drug dealers – according to the Globe. Whatever the extent or accuracy of the Globe’s reporting of the details of Whitney’s drug life, we know that drug abuse was responsible for her tragic death and ruined career.