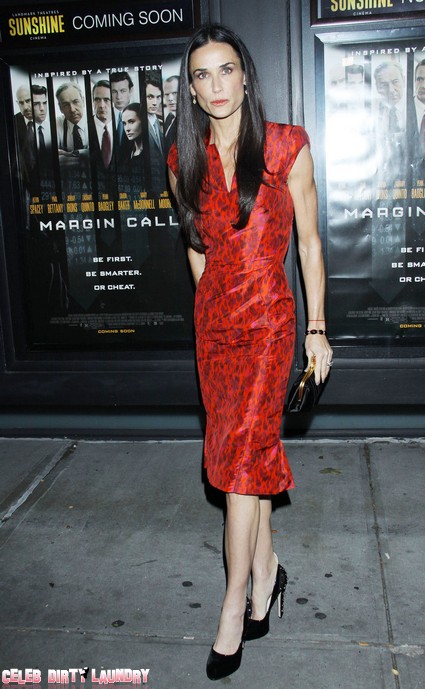 Demi and her team came up with the euphemism “personal crisis” to explain why she pulled out of ‘Lovelace.’ One of the producer’s of the film, Heidi Jo Markel told People magazine:  “It was a shock and a concern for all of us.”

“We got a call from [Moore’s representative] on Tuesday morning and said, ‘There’s been a personal crisis and we need to let you know that.’ And we were clueless. We had no idea what it entailed. We just knew she was out, that there was probably a health concern, and to move on.”

Demi was rushed to the Sherman Oaks Hospital last Monday evening suffering seizures caused by an overdose after taking a combination of drugs including nitrous oxide. Demi was partying with friends and her own daughter, Rumer Willis, at her own home when friends were forced to call 911.

Demi’s pal, Patty Jenkins, is trying to buoy up her sick friend’s image by spreading some positive propaganda:  “I just saw her and she’s doing great. I think she’s doing much better than it’s made out to be.  Demi is awesome and so strong. I also hate when people make it a bigger drama than what is going on. She’s great.”

Demi is awesome all right – taking deadly drugs with her daughter Rumer, addicted to Adderall and Red Bull, totally anorexic, she sure is great!