National Enquirer: Oprah Winfrey Tricked Out Of Millions By Gayle 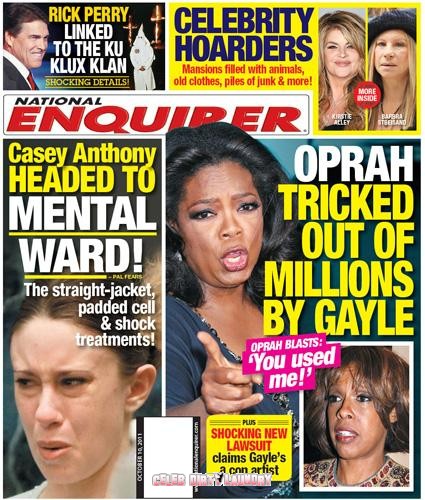 A new law suit alleges that Gayle acted as a con artist even while she was working with Oprah and had full access to all of Oprah’s business interests – and in effect used this relationship to steal millions of dollars.

Gayle King is editor-at-large for ‘O, The Oprah Magazine’ and supposedly Oprah Winfrey’s best friend.  Gayle’s professional relationship with Oprah goes back to the 90’s when she joined the magazine.

She has previously worked as a television news anchor and talk show host.  Gayle was also instrumental in the planning and creation of the ‘Legends Weekend.’   She currently stars on her own talk show, ‘The Gayle King Show’ which of course airs on OWN!

Perhaps we can see the roots of Gayle’s betrayal of Oprah by her continued friendship with Oprah’s long-term enemy, Howard Stern.

Oprah has now learned to her shock and pain that Machiavelli’s aphorism to keep ones friends close, but one’s enemies closer takes on a new twist with Gayle – as she played both roles, friend and enemy.