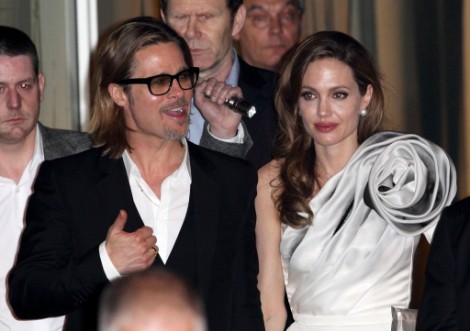 You have to be careful around Oscar season. Weird things happen. Actors get talky. Anne Hathaway wants BABIES! Ben Affleck LOVES his family and Brad Pitt’s finally getting married. Brad Pitt’ always getting married. And he knows this which is why this time we’ve got wedding rings! Angelina Jolie and Brad finally picked up the bands and now presumably nothing is standing in their way to walk down that aisle.

In Touch magazine reported: “On November 27, a stylist for the actress picked up wedding rings from Neil Lane jewelers for the couple.”

Excuse me for not holding my breath even though Brad has been awfully open lately. At his Killing Them Softly premiere he told reporters, “I am getting more pressure from my kids, and it is something I want to do within their lifetime, but I also feel like the time has come. The time is nigh. It’s soon. I got a good feeling about it.”

That sounds promising, right? Brad’s a straight talking kind of a guy. He wouldn’t lead us astray, would he? Well… of course he would. Brad’s also a competitive team player and if pimping out his wedding or kid helps a film make some money or increase his oscar chances than he’ll start getting lippy.

So let’s hope for an Oscar nomination. The chances are so much greater there will be a wedding if Brad’s got a chance to take a statue home and perch it right up there with Angelina’s. However, the oscar race is tight this year. There are SO many strong performances and although Brad’s is pretty great in Killing, he’s still considered a very distant long shot. So he wouldn’t want to blow his load with a wedding for this movie. I think we’ve still got some waiting to do. But still… if Brad Pitt buys wedding rings then there must be a wedding sooner or later, right?

Attached – Brad at the NYC screening of Killing Them Softly. I hear he’s cutting his hair soon because Angelina hates it. I’m going to miss. He hasn’t looked this good in a long time.