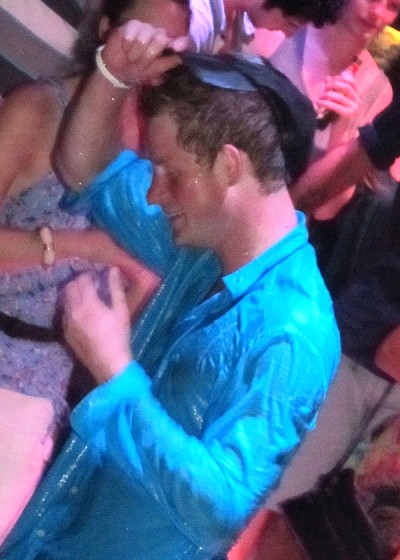 There have been whispers that something “gigantic” was coming and this latest bombshell could be just the beginning for Prince Harry and his merry friends. An eyewitness at Prince Harry’s Las Vegas shindig at the Wynn Hotel and Casino told Radar Online that the party was filled with people. Unfortunately for Harry, it was filled with drugs too.

“Things got pretty crazy in Prince Harry’s suite that night. Everyone was drinking and drugs were also being used by some people,” the source said. “Some people were snorting cocaine. Some were already rolling on shrooms (hallucinogenic mushrooms) when they arrived at the party, and some were just high on weed. And that’s exactly why no one there has come forward on the record… they don’t want to be implicated for any illegal activities.”

The source did not see Prince Harry use cocaine or any other illegal drugs but also was not with the prince during the entire party. Add this news with the fact that there’s a video getting shopped around and you have one bad situation. In fact, a different source told Radar that if the video went public it would be the “biggest Royal scandal ever.” Those are bold words for a royal family that just a generation ago housed a man who abdicated the thrown for a twice divorced American. Is getting caught with blow that much worse than marrying an American divorcee? Oh Wallis Simpson! Wouldn’t you love to see this?!

But maybe we shouldn’t jump the gun. The source didn’t see Harry doing cocaine. But this party seems a little out of control, right? It sounds like there were tons of people in the suite. I didn’t get that from Harry’s nude photos. It seemed more contained when he was hiding his crotch and, chivalrous as he is, the girl’s modesty. But if there were that many people mucking about then I’m sure there were drugs floating around. It’s Vegas! And with that many drugs and that many people, it would have been easy to sneak a phone in and take some video. But I still have my doubts in the sex tape. Prince Harry might just be on tape partaking in some mind-altering substances. It wouldn’t be the first time.

Let’s take the best cast scenario. Let’s assume there’s no footage of him doing drugs.  Let’s say Harry’s on video stumbling around with his pr-ck swinging mightily with all the attention and his new friends and you can see people doing drugs around him. Is that just as damning? Is that a potato/potatoe thing to the Queen? Because what it all comes down to is a prince shouldn’t be found in those situations. I think for the aristocracy it’s perfectly acceptable to be a fan of drugs but only your close friends need know about it. Are you surprised? Sadly, I’m not. These kids are rich and privileged. It’s par for the course. But I’ve said it before. Drugs are harder to come back from, image-wise. People frown but ultimately laugh off sex tapes. Drugs are trickier. Damn it Harry! I don’t know why I’m so disappointed but I am! I think it’s because I convinced myself that Harry was that rare breed of royalty and normal; cool and kind; rich and down to earth. I know. I know. Harry and I need to grow the f-ck up.

Are you surprised people at the party were doing cocaine? Prince Harry wasn’t spotted by the eyewitness but do you think he was involved with the drugs? What do you think is on the video?