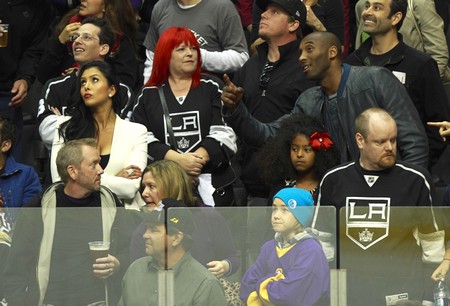 I guess Vanessa Bryant won’t divorce cheating Kobe Bryant. Vanessa really is a glutton for punishment because she still isn’t ready to dump her player husband, Kobe. Under California law she had to wait a full six months after filing the initial divorce papers before she can file the final documents to make them officially divorced. Do the math with me- she first filed back in December- so that means she can go ahead and officially divorce Kobe now. Instead the two are said to be working out the “issues” that have divided them and aiming for a full reconciliation.

I totally get wanting to try to keep a young family together, but seriously?  He has cheated on numerous occasions and who can forget the sexual assault case – through which she stood by him.  Okay, she got a huge diamond out of the deal, but still, wake up.

The couple is said to be spending plenty of time together, which is great for their little girls, but not yet living under the same roof.  If they do fully reconcile, they’d be living in one of the three mansions that Kobe signed over to Vanessa while working out the financial details of their impending divorce.

Should Vanessa dump Kobe once and for all?  She has custody of the kids and she certainly has enough money to maintain her lush lifestyle, so what is it that keeps her stuck to this guy?  Tell us your thoughts in the comments below!