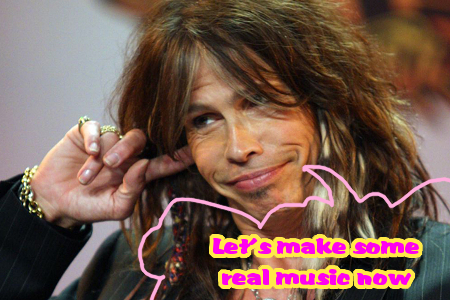 By now everyone has heard about Steven Tyler leaving American Idol, the hit singing show that, as of recently, seems to be having trouble holding onto its judges. We’ve heard his statement on why he’s decided to leave and, while there could be underlying troubles between judges, perhaps the answer is a simpler one: He’s ready to help redefine the failing rock music landscape — again.

Tyler says his decision was sparked by his desire to continue working with his band Aerosmith, which supposedly has a new album coming out in early November. This is a perfectly legitimate reason to quit a gig. It’s quite true that there could’ve been underlying problems — either between Tyler and Randy Jackson or Tyler and Jennifer Lopez — that haven’t come forward yet. Perhaps. More than likely, there is a lil’ somethin’ somethin’ at work there that contributed to the disintegrating judge’s panel.

But perhaps there’s something else that has legendary rocker Steven Tyler a bit disgruntled: The current state of rock music.

“I strayed from my first love, Aerosmith, and I’m back — but instead of begging on my hands and knees, I got two fists in the air and I’m kicking the door open with my band. The next few years are going to be dedicated to kicking some serious ass,” he says. “Idol was over-the-top fun, and I loved every minute of it . . . .  Now it’s time to bring rock back.”

Steven Tyler did wonders for the rock genre, and it sounds like now, more than ever, he’s eager to add a few more of his his groundbreaking notes to the ever-changing music industry. He says it’s “time to bring rock music back.” Apparently he thinks it’s gone somewhere — perhaps for a leisurely walk out on the town, perhaps to the store, or the movies, or to the bottom of some very unfortunate lake . . . wherever he thinks it’s traveled to let’s hope Tyler can find a way to bring it back.