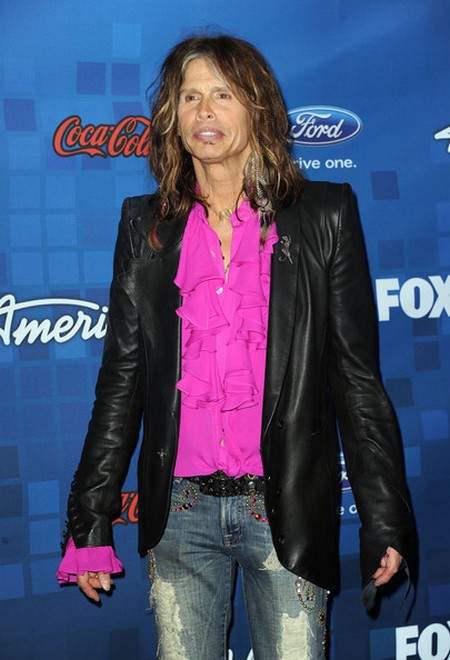 Steven Tyler has quit American Idol and wants to go back with Aerosmith. If Steven Tyler returns to Aerosmith, if they let him back in, he will be much happier than he was on Idol.  Steven is the only decent thing about Idol now and without him they will be lost.  Not that Steven was great by any means – but much better than Jennifer Lopez and boring Randy Jackson.

Jennifer Lopez implied today that she is done with Idol as well – who cares!  Jennifer is painful to watch and the show is well rid of her. Charlie Sheen and Jerry Lewis have been rumored to be coming on as judges for the show.  Both would be great!  So much more entertaining that the current line up.

No doubt Idol is feeling the pressure brought on by Simon Cowell successfully hiring Britney Spears and Demi Lovata for The X Factor USA.  We think that Idol told Jennifer and Steven that they needed to move on and gave them the chance to resign before being fired.  Idol needs to top The X Factor USA and Simon Cowell – they will be hiring now and we can expect some big big celebs to be offered the job of judge.

Steven Tyler will NOT return to the judge’s table on “American Idol” … and has compared the show to a deranged bunny killer.

Tyler completed two full seasons on the show … beginning in 2010.

Tyler has issued a statement saying, “After some long … hard … thoughts … I’ve decided it’s time for me to let go of my mistress ‘American Idol’ before she boils my rabbit.”

The comment is a reference to the movie “Fatal Attraction” … in which an obsessed woman kills her lover’s daughter’s pet rabbit.

Tyler continued, “I strayed from my first love, AEROSMITH, and I’m back – but instead of begging on my hands and knees, I’ve got two fists in the air and I’m kicking the door open with my band. The next few years are going to be dedicated to kicking some serious ass – the ultimate in auditory takeover.”

American Idol is looking for  judges.  Who should they hire?  Let us know in the comments below.