Brigitte Nielsen Speaks Out On Trashy Drunk Photos: ‘No Cause for Alarm’ (Photos) 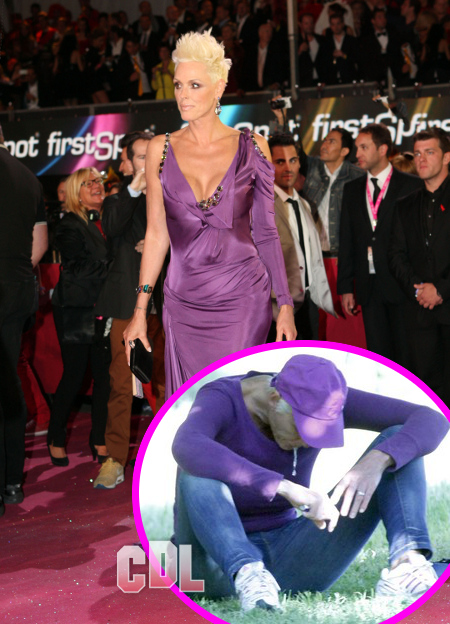 Just two days ago, CDL posted the Brigitte Nielsen drunk photos. The Celebrity Rehab alum was head-over-heels-passed-out-in-a-park hammered and now, after Hollywood has had a chance to fully ingest the glory of those snapshots, she’s speaking out on the unfortunate incident — which involved several mini bottles of vodka and other unnamed beverages.

Brigitte has recently come out and said that there should be “no cause for alarm” and that the minor slip up was sparked by a lot of emotional stress. She says that she’s been desperately trying to cope with her mother’s illness, juggle her professional and personal commitments, and also battle the pressure associated with all of those things. She tells Radar Online in an exclusive interview:

“I would like to thank all my fans as well as my friends from the Hollywood comunity for the heart warming calls and emails about those unfortunate and dramatic pictures. Looking at the pictures I can understand the level of worrying, but I can assure everyone that there is no cause for alarm. I have been on the road working non-stop for such a long time, fulfilling my professional commitments, shooting shows around the world with all the pressure that comes with it.”

Brigitte has struggled with alcoholism for much of her life so this little — or large? — slip up was very unfortunate for her. However, her statements seem very sincere and we hope that the little run-in she had with that vodka bottle will not be a recurring thing.

“That combined with major health issues in my familly drove me to the unfortunate circumstances that you can see on the pictures,” she says. “At that moment in time, I felt like I needed a moment to myself, in a park. The vodka came about as a desperate move to try to release some pressure and is under no circumstances an indication of how I lead my life on a day to day basis.”

The actress says that she’s absolutely committed to her sobriety and continues to attend her Alcoholic Anonymous meetings as well as talk with her sponsor. Cheers to an alcohol free life, Brigitte! Stay strong and power through this lil’ slip up. Don’t make us call Dr. Drew back in here. To see the Brigitte Nielsen drunk photos click here.