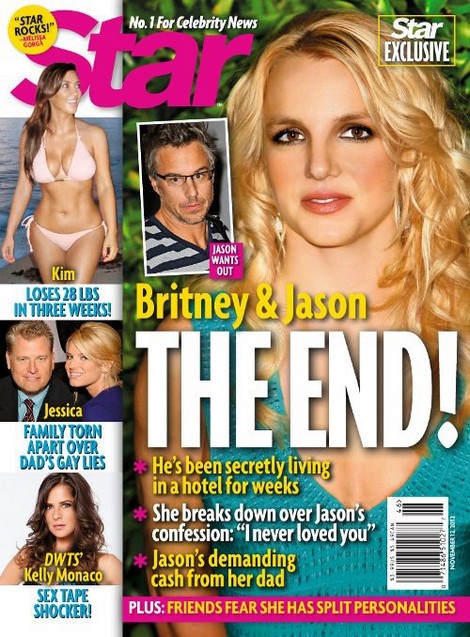 The current issue of STAR MAGAZINE is running the bombshell exclusive story “Britney and Jason  – The End!”  The magazine is claiming that The X Factor USA judge Britney Spears and her fiance and former agent Jason Trawick are over.  The two have been dating since 2010 and announced there engagement December 16, 2012.  Jason gave her a three-carat diamond ring at a party in Las Vegas the day after the announcement.

Star is claiming that Jason has been living alone in a hotel for weeks.  Furthermore, Britney broke down after Jason confessed to her that he, “Never really loved her.”  The relationship between Britney and Jason  seemed a bit odd from the get go.  They first started hooking up not long after Britney’s ride on the crazy train and it made everyone wonder why Jason, a seemingly stable entertainment agent for William Morris, would want to date such a troubled, fallen starlet. Rumors spun that their dalliance was all about money and control of her assets.

Reports have also surfaced that Jason has cheated on Britney with his former assistant Jessica Steindorff, 24. While Jason denied it, the source says Brit­ney became very jealous.  The magazine is also claiming this week that Jason is demanding money from Britney’s dad Jamie Spears.  I wonder if that is too keep his mouth shut?

Plus Star goes on to claim that her friends fears she has split personalities.  Britney is no stranger to mental illness in 2008 she was committed to the psychiatric ward of Ronald Reagan UCLA Medical Center and put on 5150 involuntary psychiatric hold.

To find out all the details of the split of Britney Spears and Jason Trawick, pick up the current issue of Star Magazine!