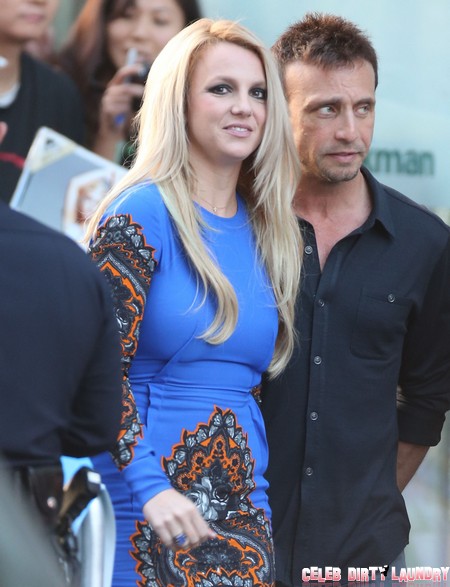 Reading all the chatter coming out of the courtroom last week one could get the impression that Britney Spears is being victimized by Sam Lutfi – poor Britney having her sterling reputation sullied. On the contrary, Sam is the least of the auto-tuned and over-medicated Britney’s worries.

Britney is being used as cash cow by her father, Jaimie Spears, and her fiancé, Jason Trawick.  They survive in high style by keeping Britney under conservatorship and selling her services to the highest bidder who is currently Simon Cowell.  Of course Britney’s two guardians also control her money, her movements, her internet access, her friends, and most critically her meds.  It is a fine balance that must be maintained with crazy Britney – they need to keep her doped up enough so that she won’t run screaming from the X-Factor studios, strip off her clothing and buy a loaf of crack – but not so sedated as to have her just sit there drooling with a blank stare as the cameras roll. Can’t wait to see how her owners manage the live X-Factor shows.

Meanwhile, it seems that through her drugged haze Britney has finally begun to realize that Jason is a plant who loves her about as much as cattle rancher loves his prize bull, probably less. Please Britney, call off your wedding to Jason – save yourself! From the great National Enquirer, a publication that dares to walk where tamer entertainment media fear to tread:

After Britney’s mental breakdown in early 2008, her father Jamie became her legal conservator. But he got tired of keeping tabs on her and hired Jason as her agent at William Morris, said the source.

“Jamie wanted Britney to fall for Jason so he wouldn’t have to be with her all the time,” explained the source.

Jamie’s plan apparently worked like a charm. In May 2010, Britney’s reps con­firmed she was dating Jason and he was giving up his job as her agent.

Jason proposed on his 40th birthday last December, and the couple planned to marry in a lavish private ceremony on the Hawaiian island of Maui in Decem­ber. But insiders say Britney is souring on their romance ever since Jason was ap­pointed to join her dad as co-conserva­tor in April.

“As Britney’s court-appointed guardian, Jason is basically paid to be her keeper, and it seems like he’s at her side all the time,” said the source. “Britney doesn’t like it, but she has no choice.”

Reports surfaced that Jason had cheated on Britney with his former assistant Jessica Steindorff, 24. While Jason denied it, the source says Brit­ney became very jealous.

Now pals say Britney is going to want out of the re­lationship and she doesn’t always wear her four-carat dia­mond engagement ring.

“I think Britney suspects that her father and Jason were playing her,” said the source. “Is her relationship with Ja­son about business or love?”

So is Britney a victim?  Absolutely – she is a victim of serious mental illness compounded by drug abuse which led to her breakdown and eventual ownership by her manipulative father and her mercenary fiancé.  If Brit’s minders cared about her and not her money she would be living a calm and happy life – surrounded by her family, children and admirers – not drugged up and forced to perform on TV.  What a bad joke – a woman under conservatorship because she is MENTALLY INCOMPETENT is judging something?  She isn’t allowed by law to choose anything in her own life – she can’t spend a single dollar without permission – but she is the star judge on X-Factor…