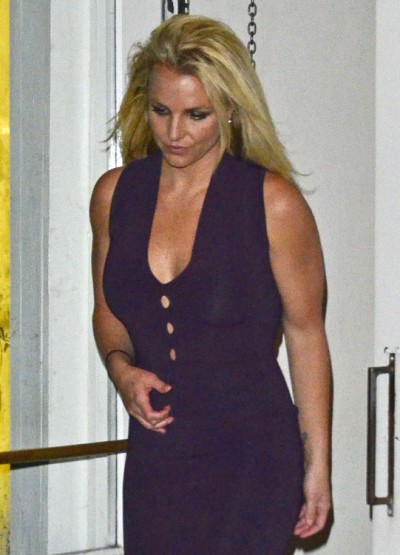 Britney Spears is on the verge of another breakdown thanks to mounting pressure from her new X Factor job. It appears the former pop goddess isn’t fully healed from her last hair buzzing, umbrella-yielding mental hiccup in 2007 and the intense lights of the reality show are starting to cause Britney to retreat to her old barefoot walking, daisy duke wearing happy place.

Those closest to Britney worry The X-Factor opportunity will be just another rise before a fall – live, in front of millions of viewers.

“Doing X Factor may lead her back into meltdown territory,” says a source. “She gets extremely nervous and anxious. She’s hard on herself and not very confident.”

Anything new, even positive developments like her engagement to Jason Trawick can rock the boat. “For her, it’s all input as stress,” explains the source. “This is a lot of change at once for Britney. She’s coming undone.”

Sources warn that Britney hasn’t healed 100 percent since her 2007/2008 breakdown. “She really is starting to seem loopy and not right,” admits a source close to Spears. “She is so happy one minute and sad and crying the next.” Adds a second source, “Her emotions are fragile.”

“She is very scared and overwhelmed by the thought of it,” a source says about the idea of participation in The X Factor. And her reported $15 million payday seems to be a hindrance, not a help. “Now that she’s gotten financially stable again, she is starting to let loose and let old demons come out,” says a source.

At a friend’s crawfish-boil party in LA’s Brentwood neighborhood May 5, Spears showed up sporting cutoffs, a cropped top and no shoes – and proceeded to ignore the other guests while muttering obscenities to herself! Hanging out alone by the food, a source says, “she would sort of say to no one, ‘F–k it, I’m eating whatever I want. I don’t care.’ Everyone was wondering what was up.”

Out of the public eye, Britney is an angel, a neighbor insists. “Britney has been keeping very quiet,” says the source, who lives near Spears’ $25,000-a-month, five-bedroom mansion in the private Sherwood Country Club.

“She has a very simple life that doesn’t require her to go out very often,” explains another source. “Everyone she needs to see comes to the house. She gets her hair done or spray-tans at home. She is definitely lonely and doesn’t have friends.”

Her favorite pastimes? Decorating her new home and working out. “She has a trainer who comes to the house a few days a week… she also has a chef who cooks meals for her and the boys.”

This is sad, right? Like Britney’s turned into a well muscled, tanned version of Miss Havisham, only she’s substituted short shorts, flip flops and Cheetos for a crusty ‘ole wedding dress and moldy cake. I hate to tell Simon Cowell I told you so, but who didn’t see this coming? Britney is not stable. She’s still not in charge of all decision-making concerning her personal affairs. Who the hell wants a mentor like that? But she will bring in monster ratings no doubt, which is all Simon probably cares about. But what does Britney care about? Does anyone have any idea what’s going on inside her head? She doesn’t need the $15 million. She doesn’t need the fame. Does anyone know what Britney needs?