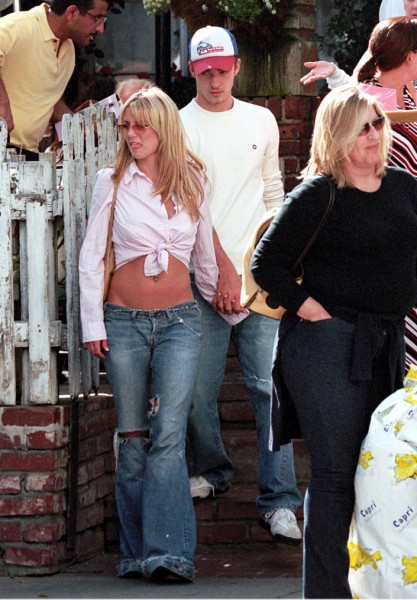 Poor Jessica Biel. She married Justin Timberlake yesterday in one of the most expensive Hollywood weddings in history, and still, all people want to talk about is Timberlake’s relationship with Britney Spears. Because it was the best. And then it wasn’t. And then Britney got a little looney and now she’s blaming new groom Justin Timberlake for everything on the weekend of his wedding. Coincidence?

Well… technically Britney’s family’s lawyers blamed Justin for Britney’s shame spiral into amphetamines, hair buzzing and, ultimately Kevin Federline. But we get the point, right? It’s essentially taken Britney Spears a decade to get over her first love and people still doubt if she’s still firing on all cylinders. Sad? Romantic? Depressing?

According to TMZ, in the opening statements yesterday for the Spears’ trial against former manager, Sam Lufti, Spears’ lawyers said she was not herself after Justin kicked her to the curb (for allegedly cheating) and was ripe for a douche like Lufti to come in and take advantage. She apparently changed overnight. Before the split, Britney was a “ray of light”, but afterwards became “angered and depressed.”

It just makes your heart cry, right? Why couldn’t he have forgiven her? She went crazy, marrying dudes in Las Vegas willy nilly. Why couldn’t he have seen that as a cry for help!? Well, no use crying over spilled milk now I suppose. Justin’s married to Jessica and Britney’s engaged to that scurvy-looking guy who may or may not be completely in control of her money. But still… how embarrassing for Spears. The fact that her lawyers had to say all that about her previous relationship on this weekend of all weekends kinda blows. The timing was not great. And Justin comes out looking like he’s the most desirable stud in the world and I can’t be havin’ that.

Britney needs to shape up! I’m tired of always defending her nasty weave while Justin golfs and sucks in Oscar-nominated movies. She needs to grab some better stylists and make-up artists, get a couple facials and go out there and make another kick-ass album and date some hot movie stars. Is that too hard to ask? Or is that time over? Is this as good as it gets?

Is it fair that Britney Spears blames Justin for her decade of mental issues and drug use? Should he have done something or was Britney beyond help at that point?