Justin Timberlake And Jessica Biel Marrying This Weekend In Italy 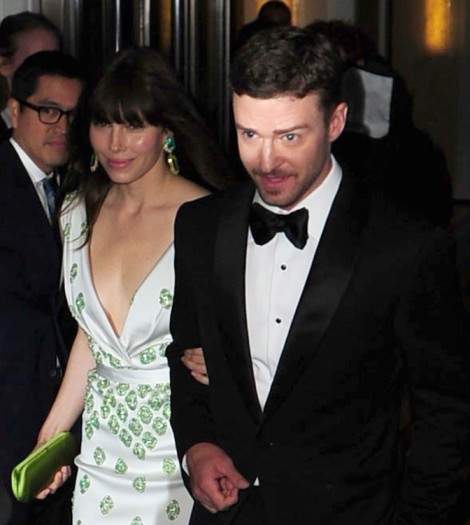 Well they’ve secretly gotten married about four times now but Life & Style is claiming it’s finally becoming official for Justin Timberlake and Jessica Biel. Who knew the couple would be so secretive? I didn’t think that was their style. But the mag insists Justin and Jessica will say their “I dos” this weekend in Italy.

“The wedding was top-secret, hush-hush,” a close friend told Life & Style. “Save-the-dates went out in the spring and little information was given. Guests were warned that any phones or cameras would be confiscated, so best to leave them at the hotel. They were told just to fly to Italy.”

Yes, just fly to Italy and take a right. Pretty generic directions! I’m sure the invitations were a little more informative especially since everyone had to sign confidentiality agreements. Relax, Justin! You’re marrying Jessica Biel. I don’t think there’s as much heat as you want there to be.

But aren’t you surprised by the secrecy? I totally am. Did the couple get shamed into keeping their “I dos” under wraps so they could keep up with the cool kids? Because I have this imaginary scenario where Justin, like Tom Cruise, is always spinning his wheels to sit next to the popular kids at lunch so he’s keeping the wedding on the hush hush because of all the other A-listers that recently did the same. Blake Lively fooled the world with her down low nuptials and Justin thinks he’s a much more important actor than the Gossip Girl alum. He likens himself to Natalie Portman and Anne Hathaway and they also went the secret ceremony route.

But that’s probably why Justin had one of his friends tip off Life & Style. He couldn’t bear not having some mystery follow him to Italy!

Are Justin Timberlake and Jessica Biel marrying this weekend, you think? They have been quiet for awhile and their schedules are open (although one could argue Jessica’s schedule is always open). Do you care? Do you secretly wish Britney Spears pulls a Graduate and stops the wedding? I’ll always secretly wish that.

Side note: I also heard Jamie Bell and Evan Rachel Wood are marrying this weekend as well. Perfect timing for them since no one will care now because of Justin’s. I love Jamie and Evan so I’m way more excited for that news! Mazel to all!