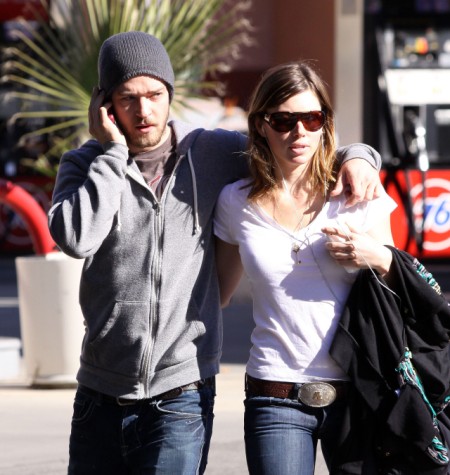 Jessica Biel has been making the rounds for Total Recall telling everyone who’ll listen that she’s been too lazy and not in any hurry to plan her wedding and marry Justin Timberlake but that could just be talk to lead the media off the trail. Sources say the couple have actually settled on the picture perfect location to recite their vows and may be doing it sooner than we all think.

Celebuzz reports the couple will get married at Yellowstone Club in Big Sky before the month is over. Timberlake owns a home on the 13,450 acre private resort and the location is special to them since they celebrated their engagement with a New Year’s party earlier this year. A source told Celebuzz the low-key, Montana retreat is perfect for them. “They have vacationed there many times before both in summer and winter and absolutely adore the location. It’s away from the hustle and bustle of Hollywood and it’s just beautiful there. The laid back lodge feel is totally their vibe.”

I think Celebuzz is actually on to something. Another reason I believe the wedding will go down this month is because Biel just passed on Hugh Jackson’s X-Men spin off, The Wolverine, due to scheduling conflicts. I don’t think Biel is ever really in a position to nix a Hugh Jackman movie. Pics have surfaced of Jackman in Australia shooting this week so it was probably too much for Biel to promote Total Recall, plan the wedding and travel back and forth from Australia to marry Timberlake and honeymoon. The only movie Biel has coming up in pre-production is The Devil in the Deep Blue Sea and The Hollywood Reporter says it isn’t set to shoot until this fall. That gives Biel roughly a two month window to enjoy some off time with her new hubby. Pretty savvy Jessica. Pretty savvy.

I know I’ve had my doubts about this couple but things oddly enough seem to be going well and full steam ahead. What do you think? Do you believe Justin and Jessica have what it takes to make it for the long haul or will this be a solid, respectable first marriage for both?