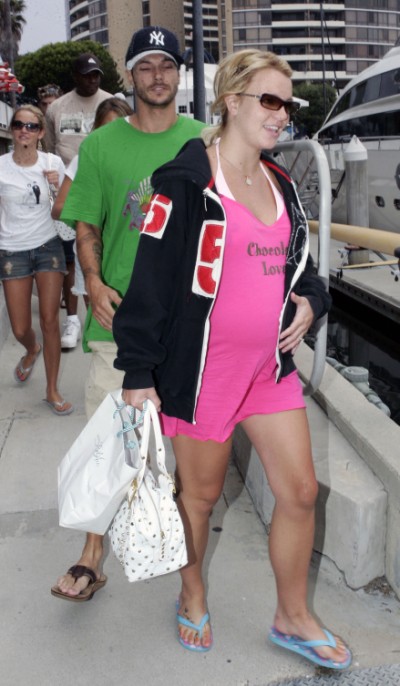 The latest news out of the Britney Spears camp is horribly scandalous for a post-Christmas story so this is all very interesting. Kevin Federline’s brother, Christopher Federline, filed a restraining order against Britney on December 18 because he claims she’s harassing him over the fact that they cheated together while she was married to Kevin. That’s not even the worst of it. He says that Sean Preston Federline is his kid and not Kevin’s! Well, at least the kid wouldn’t have to change his last name. Way to think ahead Britney!

According to Radar Online, Christopher is filing against Britney because she’s stolen his credit card in the past and continues to blackmail him over Sean Preston’s paternity. Kevin had no idea and it was Christopher and Britney’s little dirty secret. Suffice it to say the cat’s out of the bag now since Chris just spilled the sordid details.

I’m  not sure if I believe this. Naturally, I want to because it’s too smutty not to like if you’re a gossip fan but it’s way out there. But why would Christopher make these allegations up if he wasn’t trying to extort some money out of Britney? He just wants a restraining order. I don’t think money’s involved which leads me to believe Chris is not talking shit but that could be a really naive way to look at this situation. And Britney was crazy as all hell at that time. She might still be for all we know but she wasn’t on meds back then to help out. So she could be capable of screwing two brothers and lying about baby daddies. And it’s not like she hadn’t cheated before? Britney Spears cheated on Justin Timberlake with some dancer who’s name I refuse to remember.

Will we ever know the truth? I guess it’s up to Kevin. Britney and her people are going to deny this all day long or not even bother to respond. Kevin might play along and bash his brother or he might take his side which would be so much more fun. What if Kevin asked for a paternity test?? Poor Britney. Just when you think she’s getting her life back together….