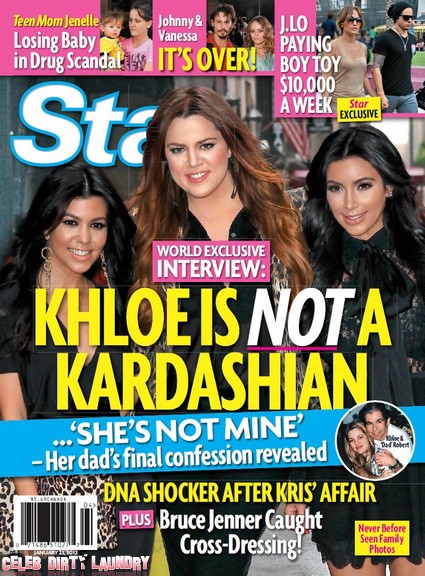 Who would have thought that when Bruce Jenner won an Olympic gold medal for the decathlon in Montreal back in 1976 that the studly dude would turn out to be a cross dresser? Well Star mag reveals this week that Bruce loves to dress in women’s clothing, accessories and shoes and quite possibly shares fashion secrets with Kim Kardashian.

According to Star mag Lawyer Robert Kardashian’s former wife, Ellen Kardashian, claims that Bruce has a secret fetish for wearing women’s clothing, shoes and lingerie.  Supposedly Ellen was having drinks with Bruce’s ex-wife, Chrystie, when they got to talking… .

Ellen claims she asked Chrystie: “Of course Bruce was every woman’s heartthrob when he was that age, right?”

Ellen was floored by the answer: “But Chrystie said, ‘Yeah, until I went on a trip and I came back and he had gone through all my clothes. And I found my bras… He’d clip them together and wear them.  I couldn’t live with that,” Chrystie confessed.

Bruce’s next wife, Kris Jenner, was not troubled by his cross dressing and Ellen tells Star that he continued to cross-dress for years after their wedding.

Problem was Kris’s daughters were NOT okay with Bruce’s taste in clothing. Finding size 13 high-heels in their mom’s closet freaked out the girls.

Ellen reveals: “Khloe called her dad and she was very upset, crying and screaming about it.”  Bruce was a hit when he was on DWTS – perhaps his next stop will be America’s Next Top Model.

Star mag also makes the claim that both Ellen and another former wife of Lawyer Robert, Jan Ashely, have evidence that shows that Khloe is not a Kardashian.