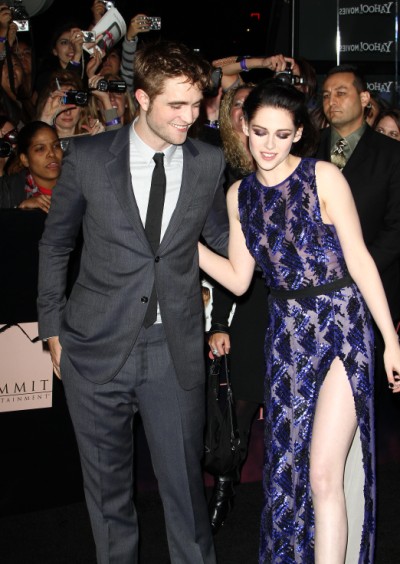 Red hot careers can be a blessing and curse especially for Twilight lovers Kristen Stewart and Robert Pattinson who are finding it difficult to be together and stay together.

“They’re having a tough time,” a source told ShowbizSpy.com. “They’ve both been very busy with their various work commitments over the past few months, so they rarely get to see each other.”

But when they do manage to be in the same city, all the couple do is get all crusty over petty annoyances. “However, when they do see each other, they end up fighting over little things. For example, Kristen hates it when Rob messes about on his phone when they’re in bed. And Rob hates it when Kristen texts at the dinner table!!”

Wait, does Kristen hate when Rob messes with his phone in bed or when they’re just in bed? It’s an interesting visualization nevertheless. These two have been together for over two years so it’s about that time for the beer goggles to wear off and Kristen and Rob to start seeing each other’s faults and idiosyncrasies in high definition 3D. There’s nothing wrong with that, it just is what it is when you’ve been with someone that long.

But this is news to me. Last time I heard the couple were uber supportive and affectionate at the Cannes Film Festival where both of them were debuting films. But Rob’s getting fat and apparently extra chub chub is a deal breaker for Kristen. “Robert’s put on nearly 10lbs eating cheeseburgers and drinking beer while he’s not been working,” the source said. “Kristen’s told him to pull himself together. He hates the gym, so she’s encouraged him to take up paddle surfing to try and work off the excess calories.”

Pull yourself together Rob for the sake of your love!

But come on Kristen, there’s just more of him to love! Besides, I would hate to be with someone skinnier than me, that’s gross and would always make me feel fat (not that Kristen has that problem).

So the couple are going through a rough patch. Who doesn’t? But it will only get more difficult I’m afraid. They’ll be doing promotion for the last Twilight movie soon, but after that, their love is on its own. There will be no more business to keep them in the same city which will be hard since their busy schedules are driving them all over the world. I think it will be more important for Rob to strike while the iron is hot. Despite Cosmopolis, his acting ability is still in question and the movies he makes in the next couple years will determine if his career can live after Twilight. I think On the Road has solidifed Kristen.

Do you think Kristen and Rob will be able to ride this rough patch out or will their demanding careers put an end to Edward and Bella forever?