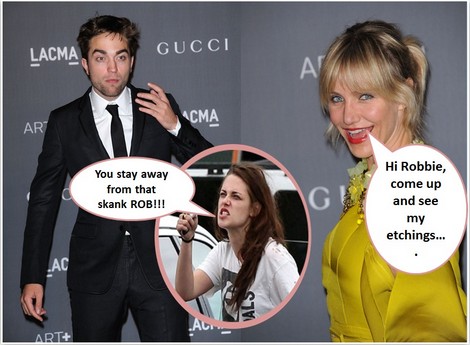 Turning 40 as a single woman must be a hard pill to swallow for Cameron Diaz because it looks like she found a cub she wants for her own, Robert Pattinson! Let’s pretend for a minute that Pattinson is single, do you think he would go for Diaz? Yeah, I don’t think so either.

Diaz spotted Pattinson at LACMA’s Art and Film Gala on October 27th where it seemed that she was demanding to get a fresh piece of meat and “trying really hard” at wooing Pattinson. According to an onlooker, “she was pretty obvious. Cam was seated next to Rob at dinner. She was touching him arm, doing her big Cameron laugh at everything he said and trying really hard. He was polite, but not having it.” Being the English gentlemen that he is, “Pattinson was polite, but not having it.”

Silly Cameron, doesn’t she know that Pattinson is spoken for. Having reconciled with Kristen Stewart, Diaz was out of luck. Maybe it’s best she just tries her luck with the typical douchebags she’s dated before, Justin Timberlake, Derek Jeter, Jared Leto, to name a few. Now I think Cameron Diaz is a good looking woman to be 40 years old, I just think she should pull a Reese Witherspoon and try to find someone in the industry, just outside the lense, like a publicist or agent.

As for Pattinson, I’m sure it must feel good to see older women hovering all over you, but you’re a better actor than any of us think, pretending to still be into Kristen Stewart after what she did. Hopefully one day, both Diaz and Pattinson will find what they are looking for, whether with different partners or being single.