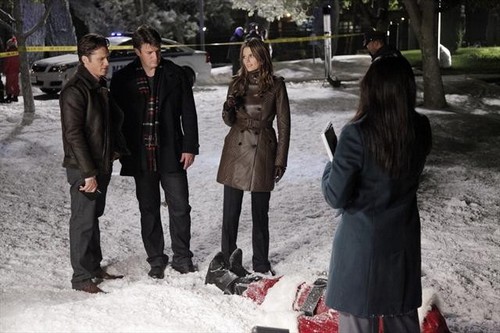 After a one week hiatus tonight CASTLE returns to ABC with a whole new episode called “Secret Santa.” On tonight’s show Castle and Beckett are on the case of the murdered Santa Claus. Did you see the last episode before the hiatus? We did and we have a full and detailed recap here for you.

On last show In the aftermath of a disastrous “Meet the Parents” dinner, a bickering Castle and Beckett were sent to retrieve the only witness to a murder. But when they get ambushed, they were forced to take the witness on the run. Stranded in the middle of the night in a bad part of town, with no phone, badge or gun, Castle and Beckett had to find a way to protect him from a team of mobsters who wanted him silenced — that is, if they didn’t kill each other first.

On tonight’s show when a bearded, rotund man in a red Santa suit with an ID reading Kris Kringle falls from the sky in Central Park, Castle and Beckett are on the hunt to find the person who killed Santa. But everything isn’t holiday cheer, as they discover St. Nick may have been more naughty than nice. Meanwhile, Castle and Beckett prepare for their first Christmas together.

Tonight’s episode is going to be great and you won’t want to miss it. So be sure to tune in for our live coverage of ABC’s Castle tonight at 10 PM EST! While you wait for our recap, hit the comments and let us know what your think of Castle season 5, so far? Hit the comments and let us know your thoughts and enjoy some pics and a sneak peek video of tonight’s episode below!

Tonight’s recap: A family is in the park making snow angels when suddenly a Santa comes hurtling out of the sky. Not just any Santa, but a dead Santa.

Meanwhile, Castle and Alexis are decorating the tree. Dear old Dad’s devastated when he finds out his Mom and Alexis both have Christmas plans that don’t involve him. He’s griping to Kate about them breaking tradition and he wants to make sure she’ll be there. She says she will if she doesn’t have to work, but makes him promise that they won’t swap gifts – she says it’s too stressful.

Castle’s double bummed because on top of his family problems, Santa’s dead. Turns out Santa’s name is Kris Kringle

He’s wearing custom boots from a leather shop in Queens. Ryan reports that there were no planes flying over when Santa fell, but Captain Gates says if you fly under 1,300 feet, you don’t have to report it.

Ryan’s depressed about Santa being dead too. Esposito wants to know if they’re still on for their Christmas tradition – beer and video games – but Ryan’s a married dude now, so that’s off. Another tradition bites the dust.

Kate and Castle head to the morgue to see Lainey. She says cause of death was a bullet to the back and she found a red paint chip on him – Castle’s sure it was from the sleigh!

Edmund Smith is the DOA Santa according to the custom boot shop. Esposito made a special trip down to the morgue to deliver the info just so he can flirt with Lainey and ask her plans for the holiday. She tells him she doesn’t want to be his sad, desperate holiday hook-up.

Knocking on the vic’s door, Kate and Castle get no answer, but the neighbors have a spare key. They tell Kate that Edmund left at 5 pm yesterday with his costume. His apartment has lots of Christmas paraphernalia. Their neighbor said they saw an older tough looking dude pounding on the door who said he was going to kill Edmund.

They ask for a description, but the neighbor sees a photo of the guy on Edmund’s bulletin board. He’s standing next to a small plane in the photo – that could have been the method for the body dump!

They head to see David Dunne at the Christmas academy. They teach Santa’s how to be super jolly. Castle calls it “Santa School.” Aww – they even made the show theme a little Christmassy and threw in a candy cane onto the show’s logo – cool!

Dunne is also a Santa and says he didn’t kill Edmund and has an alibi – he was handing out gifts to kids. He says he was mad at Edmund because he stole a Cartier print ad from him – he said he had too much peppermint schnapps and was just ranting – said he didn’t mean it.

Dunne said he was mad because he made Edmund a great Santa when he was at a low point and now he’s stealing gigs from him. Dunne said that Edmund becoming Santa turned his life around.

Ryan confirms Dunne’s alibi and that his plane was grounded, so he couldn’t have dumped him. Esposito finds info on Edmund – he used to be a big time financier and withdrew two grand from his bank the night he was killed. Ryan says the last phone call was to his ex-wife Gwenn. They bring her in for questioning.

She has an alibi – hosting a benefit for a food bank. She said Edmund called to apologize. He dumped her on Christmas morning five years ago. He left her with just the shirt on his back, no explanation and no looking back. She said when he came to see her, he seemed very nervous and on edge. Gwenn said there was a man on a motorcycle following Edmund when he got into the cab.

Esposito catches Ryan with some sexy lingerie and makes some naughty jokes about Ryan’s holiday plans with his life. The Captain catches Espo dancing around with the sexy Santa teddy!

Castle says the key to Edmund’s leaving his wife may have been prompted by them watching It’s a Wonderful Life. Ryan said Edmund’s neighbors were part of a class action suit against a shady mortgage firm Sunco. The lawyer was getting ready to drop the case, but Edmund had begged her not to. They agree to look into Sunco some more.

Castle tries to make sexy plans with Kate for the holidays, but she tells him she has to work. They’re short staffed and since she’s single (as far as the department is concerned) she got tapped to pull duty. I think she’s fibbing and requested the duty to avoid spending the holiday with Castle for some reason – Espo seems to think she’s being shady too…

After the ATM, Edmund went by taxi to an airfield in Long Island. They head out to the airfield and find a cherry red plan that looks like it could be a match for the chip on Edmund. They find blood soaked into the plane seat – looks like their murder scene!

The techs are working the crime scene and they find Edmund’s blood in the helo, but no prints – looks like it’s been wiped. Airfield boss Mr. Mudge says the owner was on vacay in Hawaii. Cate says she has to know where the bird last flew. There aren’t any records because it’s a public field, but they figure it flew about 45 miles round trip based on the fuel usage.

Castle and Alexis come back from shopping and he’s still upset about her blowing him off for the holidays. Alexis admits she’s got a new guy in her life – Max – that she’s seeing on Christmas Eve. She wants to see him because he’s leaving Christmas day to go to London. She tells him he can just spend the evening with Cate and he gets bummed all over again.

Castle brings a gift to Captain Gates to grease her up to give Cate Christmas eve off. She tells him that Cate volunteered to work on the holiday. He is not happy.

Cate and Ryan have narrowed the heli pads down to just a couple of buildings it could have landed at. They decide it must be Case Commerce. The cops are already there, working a robbery that happened during their holiday party. Turns out Edmund was their holiday party Santa and the likely culprit for the robbery. Castle muses that Santa was being more naughty than nice.

The manager says an antique clock was stolen that was worth about $30,000. The class action lawyer had said she needed $25,000 to keep working on the case for Edmund’s neighbors. They’re trying to figure out why he would take a helo to steal the clock. Castle remembers there were other clocks in Edmund’s apartment and maybe it had something to do with them.

Cate wants to know how Edmund knew about the clock when he’d never been there before. Espo found out that Edmund called in a fake cancellation call for the party to the first Santa so he could get the gig. Cate can’t figure out why he was thrown out of a helo he didn’t even need to be in.

Castle confronts Cate about ditching him on Christmas eve intentionally by volunteering to take the shift. She says Christmas means something different to her – it reminds her of when her mother died. They left the decorations up because of the funeral and when she packed them up, she said it felt like they were packing up Christmas for good. She said she always works on Christmas so that families can be together and she can watch out for them.

Ryan found a security guard that was smoking on the roof and found debris that looks like someone was waiting on the roof. They figure out it must have been Dunne and Espo goes to the Santa school to bring him in. Dunne goes after him with a candy cane and then he runs off while other Santa’s block Espoo’s way. He runs right into Ryan who has his gun and badge out and they slam him to the wall. Ho! Ho! Ho!