CDL Exclusive: Meet Brianna The Girl Who Caused Kelly Osbourne To Have A Twitter Meltdown 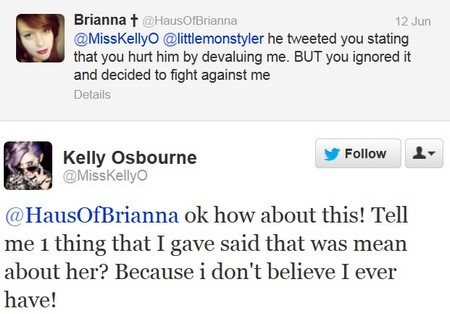 I had the exclusive pleasure to interview @HausOfBrianna recently and she’s not all too bad after all. She just doesn’t like hypocritical bitches or Kelly Osbourne for that matter. This 17 year old student seems to live a normal life. She is still at school. She likes Lady Gaga. She likes Twitter and tweeting, but one thing she doesn’t like? Celebrities invading her city like zombies, in a hybrid celeb/zombie apocalypse. She holds the dubious honour of being one of a select few people blocked by Kelly Osbourne and Perez Hilton on Twitter. Why? She asked Perez Hilton why he wasn’t kissing Lady Gaga’s ass and in true Perez fashion, he blocked her quicker than a Twilight fan at a novelist convention. The Kelly Osbourne debacle went down something like this:

[Law and Order soundtrack] –June 12th 2012, 4:35PM
@HausOfBrianna -OH MY GOD EW WHY IS @MISSKELLYO GONNA BE AT THE MMVAS?!?! GET OUT OF MY CITY, YOU HYPOCRITICAL BITCH

All hell broke loose after this tweet, with Kelly Osbourne tweeting back some pretty vile insults, including telling another Twitter user that he is “really f**king ugly”. Kelly Osbourne’s fans responded feverishly, accusing her of replying to negative tweets, instead of the positive ones they shower her with every day. Kelly’s fans jumped in and attacked @HausOfBrianna, calling her a “saddo”. Tsk, tsk Kelly, you should know better than to be so negative… Several tweets and re-tweets later, the conversation resulted in Kelly Osbourne officially blocking @HausOfBrianna.

When I asked @HauseOfBrianna why she is such a Gaga fan, she responded with, “I’m a Gaga fan because of her music talent and her connection with her fans.” Perhaps Kelly could learn a thing or two her!

What do you think CDL’ers? Have you ever had a nasty encounter with a celebrity on Twitter? Kelly Osbourne’s blocking of @HausOfBrianna might be warranted, but as we say in Celeb Land, don’t dish out what you can’t take.