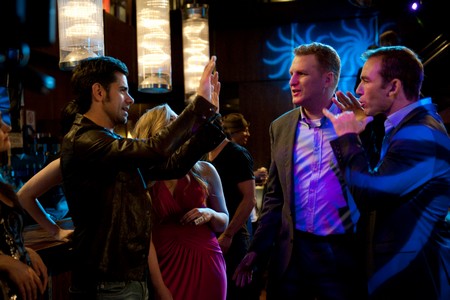 Celeb Dirty Laundry was recently honored to be one of several blogs offered a chance to visit the set of the Indie comedy My Man Is A Loser to speak with the cast & crew, observe filming and have dinner with the producers and writer/director.   I have never been on a movie set, so naturally I was super excited to take advantage of this opportunity.  Not to mention I got to meet John Stamos and Michael Rapaport.

We were put up at the Dream Hotel in Chelsea where the movie was being filmed and the trip started off with a dinner with Producer Eric Bamberger & David Goldin from Step One of Many Entertainment, Writer/Director Mike Young and Producer Vince Maggio.

During the dinner, the four spoke about the film, how it came about and the actors. The concept for the movie was thought up by Eric Bamberger.  The movie centers on two married men who enlist their single playboy friend to help them get their  mojo back in an attempt to save their lackluster marriages.  Things start to backfire almost immediately, leaving their wives wondering if the new versions of their husbands are worse than the old ones.

All four spoke very highly about all of the cast and their camaraderie and professionalism.   The movie stars John Stamos, Michael Rapaport, Bryan Callum and Tika Sumpter.

The next day we headed to the Marquee nightclub where they were filming a scene for the movie.  We were taken to the upstairs level  of the  club while filming was taking place on the lower level.  The scene we were watching was a romantic argument between John Stamos’  and Tika Sumpter’s characters.  It was really interesting to see how filming and production actually take place.

The scene we watched being filmed had nightclub patrons dancing to club music as a background.  But of course since the focus of the scene was the dialog and interaction between Stamos and Sumpter music, could not be played during their interaction.  So the scene would begin with music playing for a very short period of time, maybe a minute, to get the dancers started dancing.  Then the music would stop so that the dialog could be heard clearly – but the dancers kept on dancing as if the music was still playing.  This procedure was repeated many times and yet the dancers who had to dance without the benefit of music managed to keep the rhythm and their stamina!  When we went downstairs to the film jungle to have a live view of what was actually being filmed we were impressed at just how realistic it appeared and how well it all came together.

In between takes the actors would come upstairs to refresh themselves at the buffet and the principales would sit with us bloggers and chat and answer questions.  This gave us the opportunity to talk in depth to John Stamos, Michael Raparport and Tika Sumpter and we have already posted some of the highlights of these interviews.  See links below!

In the next several days we will post the complete transcripts of our interviews with these incredibly engaging and informative stars.

Celeb Dirty Laundry wishes to thank 360i and Step One of Many Entertainment for providing us with this wonderful opportunity to learn all about My Man Is A Loser while getting up close and personal with the starsJohn Stamos, Michael Rapaport and Tika Sumpter and experiencing first hand the operation of a live film set.

To find out all the updated news about “My Man Is A Loser” go HERE!