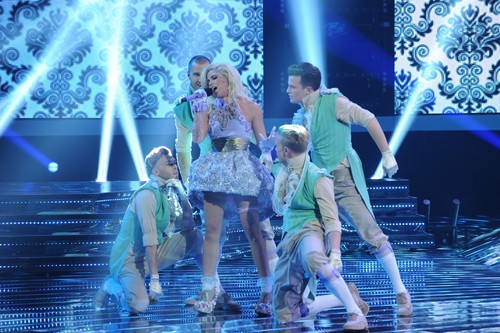 The X-Factor USA finally stopped with the shocking eliminations when CeCe Frey and Diamond White were eliminated last night. CeCe Frey, the polarizing and overstayed vocal wannabe, left the competition first with the lowest amount of votes. There were no sing-offs to save her, nor were there any judges votes to keep her safe. It ended as immediately and abruptly as it began. Diamond White and Fifth Harmony were in the dreaded sing-off, and the votes fell 3 -1 in Fifth Harmony’s favour – (L.A. Reid voted Diamond, Demi Lovato voted Diamond, Britney Spears voted Fifth Harmony, and Simon Cowell voted Diamond)

Unfortunately, the crumbling of the cookie was directly related to the predictability of last night’s vote. We all knew the end was nigh for CeCe and Diamond, so it was only a matter of time before they were booted from the show. It’s now time to shift the attention away from the eliminations and focus solely on the finale and the winner. As things are currently standing, it looks to be Carly Rose Sonenclar and Tate Stevens in the final two. Fifth Harmony will most probably take 4th place, while Emblem 3 will stay true to their name and land in 3rd place. Either or, Fifth Harmony and Emblem 3 will, in all probability, not have a shot at the final prize, except – and there’s always an “except” – there’s a massive upset and Tate or Carly lose their positions in the rankings and drop down to third or even fourth place. The upcoming week is the only time in any X-Factor contestant’s run on the show that they cannot, under any circumstances, lose their footing in the competition. One wrong move, one bad song choice, one bitchy remark and it’s all over.

In the end, the race will be between Carly and Tate. I am officially going out on a limb and boldly predicting that they will be your final two, America. The competition is theirs to lose.

The public popularity poll had no significant change in positions. In fact, this was the first week that none of the contestants really changed any position in the ranking, proving that the competition is already deadlocked and decided. There’s no popularity poll for the eliminated contestants, so we placed them in position of elimination.