Celebrity Feud: Anderson Cooper and Star Jones Bash Each other with Low Blows 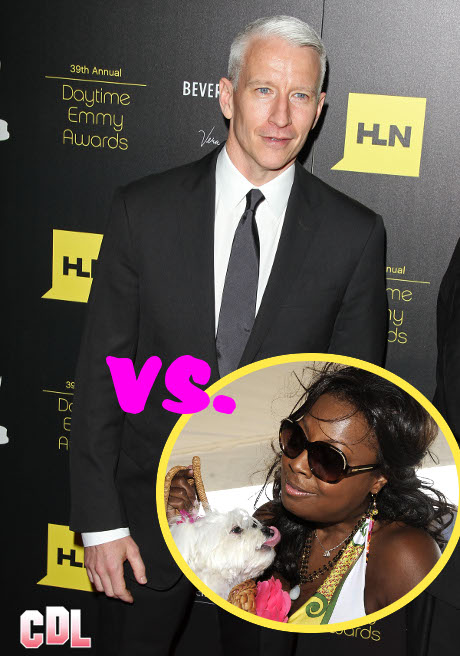 Shame on Star Jones for peeing on Anderson Cooper’s little ray of sunshine! The controversial and annoying Star Jones recently opened up about Anderson Cooper’s public coming out and said that it was all a “ratings ploy.” Anderson lashed out at Jones and said that he “didn’t know she was on still on television.” However, after Star made these ludicrous allegations and Anderson responded on his show that he was annoyed by her, she took to Twitter and attempted to illicit a response. Luckily for us, on this coming Wednesday’s edition of Anderson Live, the silver-haired Anderson will elaborate on why he is finally done with The View’s outspoken and controversial personality.

According to E! Online, Anderson was speaking via Skype to an Ann Marie Avey from Seattle, who appeared with her cat Colonel Meow on his talk show. Anderson asked Ann Marie what made the cat so angry, to which Ann Marie replied that she asked the cat about Star Jones and the cat merely quipped, “Who?” (Ah, so glad I’m a cat person!)

Anderson responded to Colonel Meow’s important question with, “Don’t get me in a war with Star Jones now. I said my peace on Star Jones. I am not one to have a feud.”

“I was wrong. @andersoncooper didn’t come out as a ratings ploy. He used ME talking about him coming out @today show as a ratings ploy. #mybad,” she bitched on Twitter recently. Anderson is refusing to respond to Star Jones’ snotty remarks, even though The Today Show contacted him and asked him to battle it out with Star. He said about this ratings ploy by The Today Show, “Actually, The Today Show tried to book me to go on with Star Jones so we could tussle. I was like, I’ve got nothing more to say, nor do I want to be in a room with her. I’m done.”

Star has, so far, released no more official Tweets, comments and/or statements. We think the bitch should shut her mouth and stop trying to draw attention to her miserable self. What do you think, readers? Do you think Anderson’s public coming out was a ratings ploy? Should Star keep her mouth shut? Let us know in the comments below. How long before the Anderson Cooper-Star Jones fight blows over?