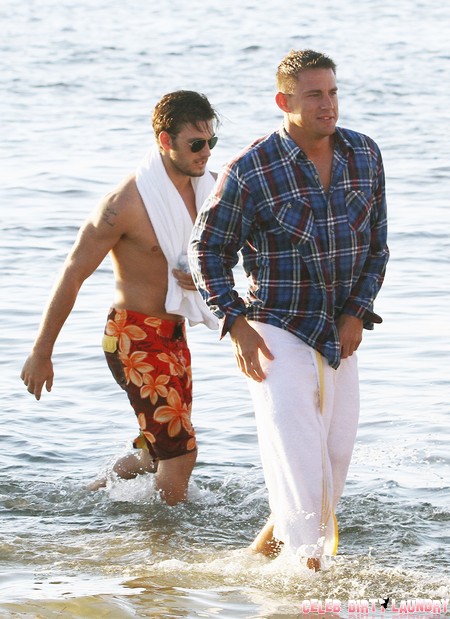 Channing Tatum is having one of the best years of his life. Not only did he star in the box-office hit and critical darling, Magic Mike, he was also awarded the title of “Sexiest Man Alive” by People magazine. Unfortunately, male model looks and insane dance moves will only get you so far in the film industry. According to a new National Enquirer report, Tatum has made more enemies than North Korea during his reign as Hollywood’s darling.

A close sourced explained to National Enquirer, “I heard actors say, ‘Channing is going to fall on butt one day, and I want a ringside seat.’ There are a lot of actors jealous of his fame, but just as many see a guy who’s a little too full of himself. If you see Channing around big-name producers or directors, he’s bowing at their feet. But he barely gives lesser-known actors the time of day.” There were several reports during the filming of Magic Mike that Tatum and co-star Alex Pettyfer were at odds, but these rumours were never proven to be true. According to Enquirer, “Channing had a producer’s credit and acted like he owned the set. Alex played a character based on Channing during his stripper days, and Tatum bossed him around all day until they nearly came to blows. And even though Alex was second billed, Channing pretty much had him cut out of any promotion for the movie.”

Jealousy does indeed make you nasty.

If “lesser-known” actors can’t handle the heat, they bloody well need to stay out of Hell’s Kitchen. Tatum is already planning to only star in movies he is able to produce – following in the footsteps of George Clooney, Brad Pitt, and Tom Hanks. If Hollywood cannot comprehend that the 2012 Tatum tree is catching the most wind, they know what to do with their heads. Regarding the Tatum/Pettyfer feud, we cannot verify the veracity of the rumours, but we do know that Tatum’s roman-a-clef was his baby and that he was the one who talked Steven Soderbergh into directing the film. We also know that Alex Pettyfer is a bitch and a faux-bad boy, so if Tatum did indeed boss Pettyfer around there must have been some sound reasoning behind it.

Obviously Tatum will step on some toes in his climb to the top, but that’s the name of the game, that’s how the cookie crumbles. The film industry is a cut-throat business where one wrong move will see you pulling knives out of your back. Fortunately, Tatum is a really good dancer; and as a result, he’ll be able to easily dodge the sharp blades of industry criticism and opinion.

Good luck Tatum. It’s a jungle out there.