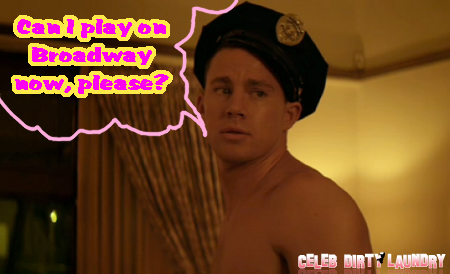 A movie about Channing Tatum‘s life as a stripper apparently wasn’t enough for him — now the actor is preparing to take his stripper poles and stripper clothes (or lack thereof) and bedazzle them with a glitzy NYC Broadway treatment, ultimately turning the show into a musical. We already have a movie, do we really need to turn it into a Broadway play? Sounds sort of like a Vegas show if you ask me.

Channing Tatum, when he had the idea to make this semi-autobiographical movie, first went to producer Steven Soderbergh to help him make his vision come to life. Now that the movie is out and has flexed its muscles at the box office, Steven Soderbergh has agreed to assist Channing in developing a Broadway version.

Wow, sounds super super classy, right? Um, maybe not . . . . Not only will fans have to dish out money for a ticket, but they’ll also be encouraged to let their dollah dollah bills on stage. Do you think this is a good idea for a play? Do you think the story will translate well to the stage . . . . Or do you think it belongs, erm, somewhere off Broadway? Like a back alleyway or something?

One thing’s for sure, Channing probably won’t be running to costar Alex Pettyfer for help any time soon. Alex Pettyfer and Channing Tatum want to fight!