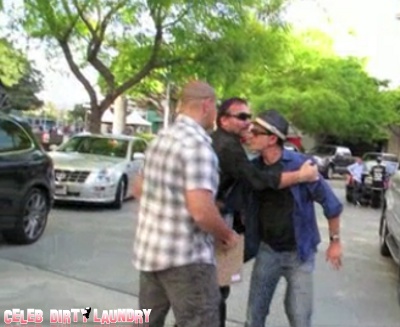 Charlie Sheen, the bad boy of Hollywood, exploded and attacked an innocent Staples Center security guard Wednesday night — and we’ve got the scoop!

He has been ridiculed, parodied, and utterly destroyed the past year. His name has been on the front page of tabloids the world over. He has been infamous for his outbursts, prostitutes and drug use and now it seems Charlie is back on track as the biggest badass in Hollywood.  Who in their right mind takes on a security guard? Chuck Norris and Charlie Sheen.

Charlie was at the NHL Stanley Cup playoff between two unimportant teams yesterday (Seriously, you don’t really care who the teams were? Do you?). Charlie went for a cigarette during the game and of course, in true Charlie fashion, he did not adhere to the “No re-admittance policy”. There are several designated smoking areas in the venue itself, but why would this bad boy possibly mingle with plebs? No, Charlie smokes outside and no-one will stop him.

Charlie wanted to re-enter the stadium, but a female security guard stopped him dead in his tracks. He flipped his lid and screamed at the security guard, “You know what? Blow my f****** b*lls you a**hole!” The interaction between Sheen and the security guard caused several onlookers to take out their cameras. Sheen walked past one of the (nervous-omg-Charlie-will-hit-me!) recorders and said into the camera, “Have common sense and common courtesy gone in society?” Yes, Charlie, we ask ourselves that every single time one of your news stories break, so buck up Charles, you’re an idiot!

Charlie’s team (does he still have a PR person? OMG!) did not respond, neither did the security guard, but there’s rumours that she quit her job and joined The Real Housewives of People Who Stopped Charlie Sheen. They say it will be a ratings darling and a critical success. Watch out for it on the comedy channel, or Discovery, whichever one you prefer.